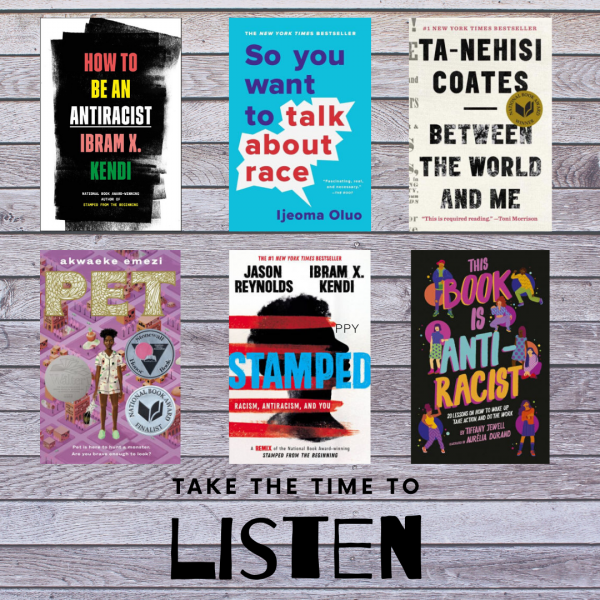 By choosing new books by diverse voices we’ve discovered a richer world, and hope to share that richness with you.

The aftermath of the alarming events of 2020 caused considerable pain. For many people, it created a long overdue desire to better understand the causes of systemic racism and to learn to act proactively against it. Most of us would not self-identify as racists, but is that enough? How do we become antiracist, for that is the new goal? As with many things, we believe that one of the best places to start is with a book. There are countless books that detail the Black experience, help us better understand and navigate racism, and help us learn the best way to show an anti-racist allyship. Not every book on this list is a call to action. Some are simply great reads.

Here are a few to get you started...

Amazons, Abolitionists, and Activists: A Graphic History of Women's Fight for Their Rights, by Mikki Kendall, A. D'Amico (Illustrator)

An American Marriage, by Tayari Jones

An African American and Latinx History of the United States, by Paul Ortiz

Aftershocks: A Memoir, by Nadia Owusu

Between the World and Me, by Ta-Nehisi Coates

The Bluest Eye, by Toni Morrison

Born a Crime: Stories from a South African Childhood, by Trevor Noah

Bride of the Sea, by Eman Quotah

A Burning, by Megha Majumdar

Bury My Heart at Wounded Knee: An Indian History of the American West, by Dee Brown

The City We Became, by N.K. Jemisin

A Colony in a Nation, by Chris Hayes

The Color of Law: A Forgotten History of How Our Government Segregated America, by Richard Rothstein

The Death of Vivek Oji, by Akwaeke Emezi

Dreams From My Father, by Barack Obama

The End of Policing, by Alex S Vitale

The Fire This Time, by Jesmyn Ward

Girl With the Louding Voice, by Abi Dare'

Hood Feminism: Notes from the Women That a Movement Forgot, by Mikki Kendall

How Long Til Black Future Month? by N.K. Jemisin

How to Be an Antiracist, by Ibram X. Kendi

How to Be Less Stupid about Race: On Racism, White Supremacy, and the Racial Divide, by Crystal Marie Fleming

How To Kill A City: Gentrification, Inequality, and the Fight for the Neighborhood, by PE Moskowitz

How We Fight for Our Lives: A Memoir, by Saeed Jones

How We Show Up: Reclaiming Family, Friendship, and Community, by Mia Birdsong

I Am Not Your Negro, by James Baldwin and Raoul Peck

I Know Why the Caged Bird Sings, by Maya Angelou

If Beale Street Could Talk, by James Baldwin

An Indigenous Peoples' History of the United States, by Roxanne Dunbar-Ortiz

It is Wood, It is Stone, by Gabriella Burnham

Just Mercy: A Story of Justice and Redemption, by Bryan Stevenson

Just Us: An American Conversation, by Claudia Rankine

Light for the World to See, by Kwame Alexander

The Making of Asian America: A History, by Erika Lee

Me and White Supremacy: Combat Racism, Change the World, and Become a Good Ancestor, by Layla Saad, Robin Diangelo (Foreword by)

Motherhood So White: A Memoir of Race, Gender, and Parenting in America, by Nefertiti Austin

The Mothers, by Brit Bennett

The New Jim Crow: Mass Incarceration in the Age of Colorblindness, by Michelle Alexander

The New Negro: The Life of Alain Locke, by Jeffrey C. Steward

The Nickel Boys, by Colson Whitehead

One Person, No Vote: How Voter Suppression Is Destroying Our Democracy, by Carol Anderson, Dick Durbin (Foreword by)

A Promised Land, by Barack Obama

Red at the Bone, by Jacqueline Woodson

Rise Up: Confronting a Country at the Crossroads, by Rev. Al Sharpton

So You Want to Talk About Race, by Ijeoma Oluo

Song of Solomon, by Toni Morrison

Stamped: Racism, Antiracism, and You: A Remix of the National Book Award-winning Stamped from the Beginning, by Jason Reynolds & Ibram X. Kendi

Such a Fun Age, by Kiley Reid

The Fire This Time: A New Generation Speaks about Race, by Jesmyn Ward

Tears We Cannot Stop: A Sermon to White America, by Michael Eric Dyson

Their Eyes Were Watching God, by Zora Neale Hurston

There, There, by Tommy Orange

Unapologetic: A Black, Queer, and Feminist Mandate for Radical Movements, by Charlene Carruthers

Uncomfortable Conversations with a Black Man, by Emmanuel Acho

The Underground Railroad, by Colson Whitehead

Vanguard: How Black Women Broke Barriers, Won the Vote, and Insisted on Equality for All, by Martha S. Jones

The Vanishing Half, by Brit Bennett

The Warmth of Other Suns, by Isabel Wilkerson

The Water Dancer, by Ta-Nehisi Coates

We Are Called to Be a Movement, by Rev. Dr. William Barber II

We Gon' Be Alright: Notes on Race and Resegregation, by Jeff Chang

We Should All Be Feminists, by Chimamanda Ngozi Adichie

We Want to Do More Than Survive: Abolitionist Teaching and the Pursuit of Educational Freedom, by Bettina Love

We Were Eight Years in Power, by Ta-Nehisi Coates

When No One is Watching, by Alyssa Cole

White Fragility: Why It's So Hard for White People to Talk About Racism, by Robin DiAngelo, Michael Eric Dyson (Foreword by)

White Trash: The 400-Year Untold History of Class in America, by Nancy Isenberg

Who Do You Serve, Who Do You Protect?: Police Violence and Resistance in the United States, by Alicia Garza (Foreword by), Maya Schenwar (Editor), Joe Macare' (Editor)

Why I'm No Longer Talking to White People About Race, by Reni Eddo-Lodge

Why We Can't Wait, by Martin Luther King Jr.

The World Doesn't Require You: Stories, by Rion Amilcar Scott

Anger Is a Gift, by Mark Oshiro

Before the Ever After, by Jacqueline Woodson

Black Is a Rainbow Color, by Ekua Holmes and Angela Joy

Child of the Dream (a Memoir of 1963), by Sharon Robinson

The Crossover, by Kwame Alexander

The Day You Begin, by Jacqueline Woodson

The Fire Next Time, by James Baldwin

Harbor Me, by Jacqueline Woodson

The Hate You Give, by Angie Thomas

If You Come Softly, by Jacqueline Woodson

Inside Battle, by Melanie Sumrow

Intersectionallies: We Make Room for All, by Chelsea Johnson, Latoya Council, & Carolyn Choi

Lifting as We Climb: Black Women's Battle for the Ballot Box, by Evette Dionne

Love, Hate and Other Filters, by Samira Ahmed

Not My Idea: A Book about Whiteness, by Anastasia Higginbotham

On the Come Up, by Angie Thomas

The Only Black Girls in Town, by Brandy Colbert

Piecing Me Together, by Renée Watson

The Poet X, by Elizabeth Acevedo

The Rose That Grew From Concrete, by Tupac Shakur

Someday Is Now: Clara Luper and the 1958 Oklahoma City Sit-Ins, by Olugbemisola Rhuday-Perkovich and Jade Johnson

Something Happened in Our Town: A Child's Story about Racial Injustice, by Marianne Celano, Marietta Collins, and Ann Hazzard

I'm Not Dying with You Tonight, by Gilly Segal & Kimberly Jones

This Book Is Anti-Racist: 20 Lessons on How to Wake Up, Take Action, and Do the Work, by Tiffany Jewell, Aurelia Durrand (Illustrator)

This Is My America, by Kim Johnson

We Are Not Free, by Traci Chee

We Are Not from Here, by Jenny Torres Sanchez

We Are Not Yet Equal: Understanding Our Racial Divide, by Carol Anderson & Tonya Bolden

What Lane? by Torrey Maldonado

When I Was the Greatest, by Jason Reynolds & Michael Frost

Where Are You From? by Jaime Kim and Yamile Saied Méndez