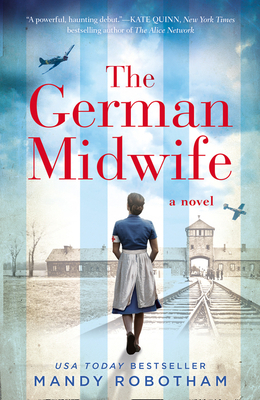 An enthralling new tale of courage, betrayal and survival in the hardest of circumstances that readers of The Tattooist of Auschwitz, The Secret Orphan and The Man Who Broke into Auschwitz will love.

Germany, 1944. A prisoner in the camps, Anke Hoff is doing what she can to keep her pregnant campmates and their newborns alive.

But when Anke's work is noticed, she is chosen for a task more dangerous than she could ever have imagined. Eva Braun is pregnant with the F hrer's child, and Anke is assigned as her midwife.

Before long, Anke is faced with an impossible choice. Does she serve the Reich she loathes and keep the baby alive? Or does she sacrifice an innocent child for the good of a broken world?

*Published in the UK as A Woman of War*

Mandy Robotham's highly awaited next book, The Secret Messenger, is out now.

Mandy Robotham has been an aspiring author since the age of nine, but was waylaid by journalism and later enticed by birth. She's now a practising midwife who writes about birth, death, love and everything else in between. She graduated with an MA in Creative Writing from Oxford Brookes University. This is her first novel.