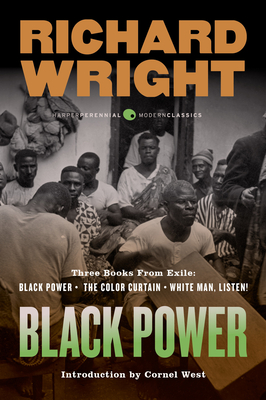 Three extraordinary nonfiction works by Richard Wright, one of America's premier literary giants of the twentieth century, together in one volume for the first time, with an introduction by Cornel West.

Originally published in 1954, Richard Wright's Black Power is an impassioned chronicle of the author's trip to Africa's Gold Coast before it became the free nation of Ghana. It speaks eloquently of empowerment and possibility, and resonates loudly to this day.

Also included in this omnibus edition are White Man, Listen!, a stirring collection of Wright's essays on race, politics, and other essential social concerns ("Deserves to be read with utmost seriousness"-New York Times), and The Color Curtain, an indispensable work urging the removal of the color barrier. It remains one of the key commentaries on the question of race in the modern era. ("Truth-telling will perhaps always be unpopular and suspect, but in The Color Curtain, as in all his later nonfiction, Wright did not hesitate to tell the truth as he saw it."--Amritjit  Singh, Ohio University)

Richard Wright won international renown for his powerful and visceral depiction of the black experience. He stands today alongside such African-American luminaries as Zora Neale Hurston, James Baldwin, and Toni Morrison, and two of his novels, Native Son and Black Boy, are required reading in high schools and colleges across the nation. He died in 1960.

"[He] writes with emotional persuasiveness and power, relentlessly probing men, motives, myths, and history for a terrifying glimpse of a continent in turmoil." — Newsday

"The reader will be grateful...for many fascinating, and even illuminating glimpses of primitive tribal life in a country marked out for precocious political development." — New York Times