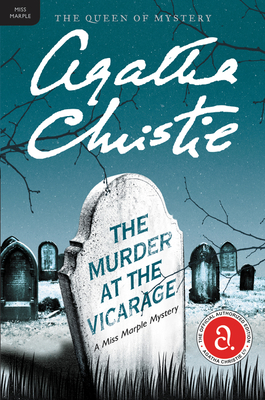 This is book number 1 in the Miss Marple Mysteries series.

In this exclusive authorized edition from the Queen of Mystery, a dead body in a clergyman’s study proves to the indomitable sleuth that no place, holy or otherwise, is a sanctuary from homicide.

Miss Marple encounters a compelling murder mystery in the sleepy little village of St. Mary Mead, where under the seemingly peaceful exterior of an English country village lurks intrigue, guilt, deception and death.

Colonel Protheroe, local magistrate and overbearing land-owner is the most detested man in the village. Everyone--even in the vicar--wishes he were dead. And very soon he is--shot in the head in the vicar's own study. Faced with a surfeit of suspects, only the inscrutable Miss Marple can unravel the tangled web of clues that will lead to the unmasking of the killer.

“Agatha Christie taught me two things: that plotting mysteries was an art, and that a woman detective could be as strong a character as a male detective.”
— Charles Todd, New York Times bestselling author of the Ian Rutledge mysteries and Bess Crawford mysteries

“When she really hits her stride, as she does here, Agatha Christie is hard to surpass.”
— Saturday Review of Literature

"The Murder at the Vicarage was my gateway drug into crime fiction at the age of nine and I've never regretted the addiction!"
— Val McDermid, award-winning author of the Tony Hill and Carol Jordan series