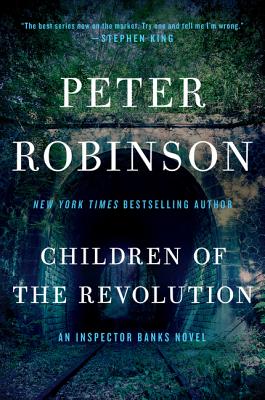 This is book number 21 in the Inspector Banks Novels series.

The body of a disgraced college lecturer is found on an abandoned railway line. In the four years since his dismissal for sexual misconduct, he’d been living like a hermit. So where did he get the 5,000 pounds found in his pocket?

Leading the investigation, Detective Chief Inspector Alan Banks begins to suspect that the victim's past may be connected to his death. Forty years ago the dead man attended a university that was a hotbed of militant protest and divisive, bitter politics. And as the seasoned detective well knows, some grudges are never forgotten—or forgiven.

Just as he’s about to break the case open, his superior warns him to back off. Yet Banks isn’t about to stop, even if it means risking his career. He's certain there’s more to the mystery than meets the eye . . . and more skeletons to uncover before the case can finally be closed.

“Absorbing...Robinson excels at connecting his detectives’ personal stories to the investigation, endowing familiar characters with fresh nuance and depth. Impeccable pacing fleshes out Miller’s tragic life and unravels the killer’s motive.” — Publishers Weekly on CHILDREN OF THE REVOLUTION

Praise for Peter Robinson and the Detective Banks series: “Robinson rolls out a police procedural with exquisite precision.” — USA Today

“It’s easy to relate to and root for Banks.” — New York Post

“Haunting stand-alone from Arthus Ellis Award-winner Robinson.” — Publishers Weekly on Before the Poison

“[Childred of the Revolution is] well-plotted and satisfying right to the end....Robinson has won many awards for his Detective Banks novels, and with this latest, he demonstrates his mastery of the craft.” — Kirkus Reviews (starred review) on CHILDREN OF THE REVOLUTION

“Excellent.” — Library Journal on CHILDREN OF THE REVOLUTION

“Banks is a fully rounded character - smart, dogged and not above defying his superiors. The supporting cast is equally strong, including the wonderfully named Detective Sergeant Winsome Jackman and Lady Veronica Chalmers, an aristocrat whose radical activities during her university years link her to the dead man.” — Seattle Times on CHILDREN OF THE REVOLUTION

“Meticulously detailed...This is a fine, twisty, surprising tale.” — Providence Journal on CHILDREN OF THE REVOLUTION

“Robinson again succeeds in creating a satifyingly confounding mystery and increasing the already formidable depth of his superb ensemble cast.” — Alfred Hitchcock Mystery Magazine on CHILDREN OF THE REVOLUTION