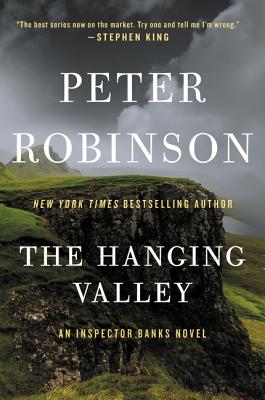 This is book number 4 in the Inspector Banks Novels series.

From New York Times bestselling and Edgar Award-winning author Peter Robinson, a fascinating thriller—perfect for fans of Louise Penny and Elizabeth George—that leads Detective Chief Inspector Alan Banks on a harrowing journey into a town’s sordid past where a diabolical killer lies in wait.

Visitors have long been drawn to the beauty and serenity of the Yorkshire countryside. Some never leave—like the hiker whose decomposing corpse is discovered in a wooded valley outside the tiny village of Swainshead.

It is the second such homicide to plague the region in recent years, and it is pulling investigating Detective Chief Inspector Alan Banks into a dangerous mire of dark pasts, local power, and private shames. For a shocking truth and cold-blooded killer are waiting there…and Banks is determined to walk into a valley of death to expose them both.

An arresting, electrifying novel of suspense, The Hanging Valley will remain etched in readers’ minds.