My Life Among the Underdogs: A Memoir (Hardcover) 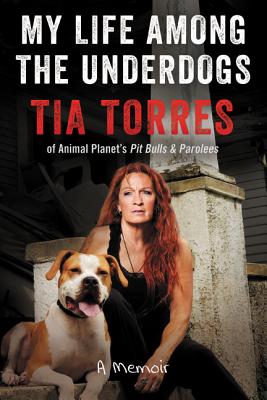 My Life Among the Underdogs: A Memoir (Hardcover)

From one of the most respected figures in the dog rescue community come the harrowing, funny, and inspiring stories of nine incredible dogs that shaped her life.

Tia Torres, beloved underdog advocate and star of Animal Planet's hit show Pit Bulls & Parolees, chronicles her roller-coaster life in this heartwarming memoir featuring some of her best-loved dogs. With inimitable honesty and characteristic brashness, Tia captures the spirit and heart of these intelligent and loving canines, while carrying us behind the scenes of her TV show, into the heart of post-Katrina New Orleans, onto the soundstages of Hollywood films, and even to the jungles of Sri Lanka.

Tia has devoted her life to shattering the stereotype that pit bulls are dangerous, vicious predators. As the top dog at the Villalobos Rescue Center in New Orleans, the largest pit bull rescue in the United States, she and her team have rescued, rehabilitated, and rehomed hundreds of animals that might otherwise have been destroyed. As she puts it, "Most of the stories in this book are about animals (and a few humans) that needed someone to believe in them and a purpose in order to show their true nobility."

Each dog Tia writes about here has overcome abuse, trauma, neglect, or just bad luck to become a stalwart, loving companion to Tia and her family. You'll meet Duke, whose intelligence and matinee-idol looks made him a star in movies and music videos; Junkyard Joe, whose single-minded passion for tennis balls was channeled into expertise as a drug-sniffing dog; Bluie, the unswerving protector of Tia's daughter Tania; and a host of other unforgettable canines.

My Life Among the Underdogs

is above all a love story--one that is sure to grip the heart of anyone who has ever loved a dog.

Tia Torres is the founder and proprietor of Villalobos Rescue Center, the largest Pit Bull facility in the United States, and the star of the hugely popular Animal Planet show Pit Bulls & Parolees, which has been on the air since 2009. After serving six years in the army, Torres worked for a Los Angeles city program to curb gang violence, serving as a liaison between the city and gang members. She also became an advocate for Pit Bulls, forming the Pit Bull Support Group, which offered free classes and assistance for Pit Bull owners. In 2006, she launched Underdawgz, a program that pairs parolees with rescue dogs. Tia lives somewhere in the swamps of south Louisiana with eight dogs.

“Readers get to know Torres through the stories of dogs who played special roles in her life.... Each pit bull profiled shows the potential in rescue dogs, regardless of their backgrounds. Animal-loving readers will be drawn to Torres’s commitment to the ‘underdogs’ she has spent her life caring for.” — Library Journal

“Torres does vital, admirable work, and fans of her show as well as animal lovers in general will enjoy these warm-hearted recollections.” — Booklist