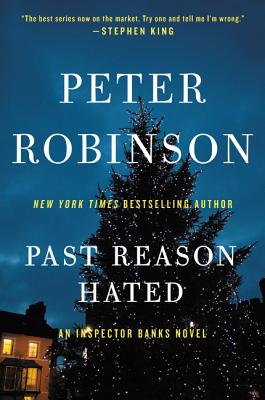 This is book number 5 in the Inspector Banks Novels series.

From New York Times bestselling and Edgar Award-winning author Peter Robinson comes this gripping thriller—in the tradition of Louise Penny and Elizabeth George—set in a picturesque Yorkshire village during the upcoming Christmas season...but one of its residents will not be celebrating this holiday.

She was a beautiful enigma, brutally stabbed in her own home three days prior to Christmas. Leaving her past behind for a forbidden love affair, she mystified more than a few. And now she is dead, clothed only in her unshared mysteries and her blood.

In this season of giving and forgiving, Banks is eager to absolve the innocent of their sins. But that must wait until the many facets of a perplexing puzzle are exposed and the dark circle of his investigation finally closes…and when a killer makes the next move.

Past Reason Hated is a relentlessly suspenseful novel that shows why Peter Robinson is one of the world’s most acclaimed and popular mystery writers.