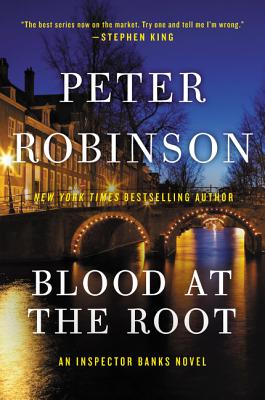 This is book number 9 in the Inspector Banks Novels series.

In the long shadows of an alley a young man is murdered by an unknown assailant. The shattering echoes of his death will be felt throughout a small provincial community on the edge—because the victim was far from innocent, a youth whose sordid secret life was a tangle of bewildering contradictions. Now a dedicated policeman beset by his own tormenting demons must follow the leads into the darkest corners of the human mind in order to catch a killer.

Delving into the complicated human psyche, Blood at the Root showcases Peter Robinson’s singular talent in an exceptional novel of suspense that will linger in readers’ minds long past the final page.