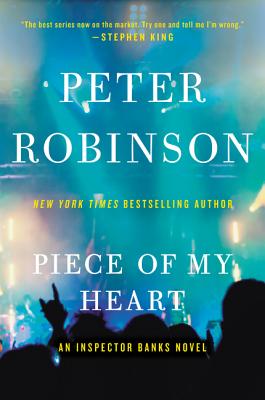 This is book number 16 in the Inspector Banks Novels series.

New York Times bestselling author Peter Robinson’s Chief Inspector Alan Banks must turn to a murder committed in the 1960s in order to solve a present-day homicide as he races to uncover their common link.

1969 . . . In an era of free love and rebellion, a dead body is discovered among the detritus of a recently concluded rock festival—a beautiful young woman stabbed so savagely through the chest that a piece of her heart was sliced off.

Now . . . A freelance journalist, a stranger to the region, is savagely bludgeoned to death in a shocking act of violence with no apparent motive.

Two murders separated by four decades are investigated by two very different but equally haunted investigators—one, a casualty of war unable to come to terms with a confusing new world; the other, a rogue policeman harboring ghosts of his own. But the truth behind a grisly present-day slaying may somehow be hidden in the amplified, drug-induced fog of a notorious past, propelling Detective Chief Inspector Alan Banks into the darkest shadows of the peace, love, and rock 'n' roll generation.

“A fast-moving story [with] some knockout scenery and an assemblage of delicately drawn characters.” — Raleigh News & Observer

“Robinson has kept up an astonishingly high standard...make no mistake, he’s among the very best.” — London Times

“The best series now on the market.” — Stephen King