The Good Soldier Svejk and His Fortunes in the World War: Translated by Cecil Parrott. With Original Illustrations by Josef Lada. (Paperback) 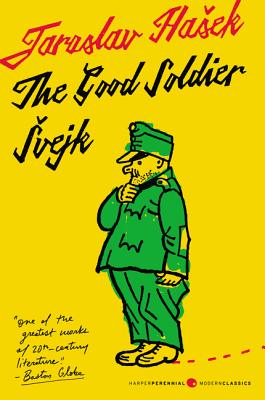 The Good Soldier Svejk and His Fortunes in the World War: Translated by Cecil Parrott. With Original Illustrations by Josef Lada. (Paperback)

“The classic comic novel of the First World War.” —The New Yorker • “A literary masterpiece.” —New York Review of Books • “One of the greatest works of 20th century literature.” —Boston Globe

Jaroslav Hasek's The Good Soldier Svejk follows the adventures of Josef Svejk, a boisterous and sometimes bumbling (or brilliantly subversive?) Czech soldier, as he navigates the trials of World War I. Thrust into the Austro-Hungarian Empire's army in 1914, Svejk, "one of the great characters of 20th century literature" (New Republic), embarks on a wild trip through war-ravaged Europe as he fakes illnesses, is captured by his own men, and takes on various quixotic quests to avoid arriving at the front lines, always with a bizarre—and often hilarious—anecdote at the ready. Predating countercultural American classics like Catch-22 by a generation, The Good Soldier Svejk was the first great antiwar satire, and still one of the finest ever written.

“Without Svejk, Joseph Heller has said, there would have been no Catch-22.” — The Guardian

“One of the greatest works of 20th century literature.” — Boston Globe

“Rich and ranging, endlessly inventive. ... The predicaments of Svejk in an absurd world still continue. And the laughter echoes.” — Los Angeles Times

“[Svejk] is one of the great characters of 20th-century literature. ... [Hasek] captures the flavor of life in early-century Prague. ... Hasek’s honesty, clarity of detail, and pawky restraint have made The Good Soldier Svejk a near classic.” — New Republic

“All the good adjectives apply to [this novel]: robust, bawdy, sly, hugely comic and astonishingly inventive; it is also singularly undemanding on its readers. ... A very funny novel and a wise one.” — Newsweek

“Anyone in power, including the president would benefit from Jaroslav Hasek’s The Good Soldier Svejk. ... First because it would make them laugh, and then because it is the best antiwar novel I know.” — Colm Toibin, New York Times

“Continues to have an astonishing afterlife. ... Commonly cited as an ancestor of Joseph Heller’s Catch-22... [its] continued resonance suggests how deep a nerve Hasek touched. His comic hero highlights the illogic of war so brilliantly that Svejk’s character has been absorbed into Western culture.” — New York Times

“One of the masterpieces of Czech comic literature.” — Time Out