Oscar Wars: A History of Hollywood in Gold, Sweat, and Tears (Hardcover) 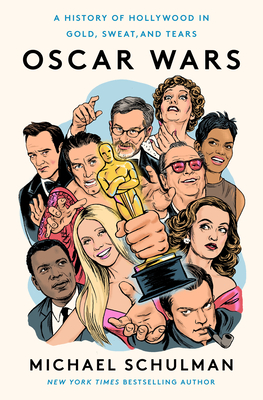 Oscar Wars: A History of Hollywood in Gold, Sweat, and Tears (Hardcover)

The author of the New York Times bestseller Her Again: Becoming Meryl Streep returns with a lively history of the Academy Awards, focusing on the brutal battles, the starry rivalries, and the colorful behind-the-scenes drama.

America does not have royalty. It has the Academy Awards. For nine decades, perfectly coiffed starlets, debonair leading men, and producers with gold in their eyes have chased the elusive Oscar. What began as an industry banquet in 1929 has now exploded into a hallowed ceremony, complete with red carpets, envelopes, and little gold men. But don’t be fooled by the pomp: the Oscars, more than anything, are a battlefield, where the history of Hollywood—and of America itself—unfolds in dramas large and small. The road to the Oscars may be golden, but it’s paved in blood, sweat, and broken hearts.

In Oscar Wars, Michael Schulman chronicles the remarkable, sprawling history of the Academy Awards and the personal dramas—some iconic, others never-before-revealed—that have played out on the stage and off camera. Unlike other books on the subject, each chapter takes a deep dive into a particular year, conflict, or even category that tells a larger story of cultural change, from Louis B. Mayer to Moonlight. Schulman examines how the red carpet runs through contested turf, and the victors aren't always as clear as the names drawn from envelopes. Caught in the crossfire are people: their thwarted ambitions, their artistic epiphanies, their messy collaborations, their dreams fulfilled or dashed.

Featuring a star-studded cast of some of the most powerful Hollywood players of today and yesterday, as well as outsiders who stormed the palace gates, this captivating history is a collection of revelatory tales, each representing a turning point for the Academy, for the movies, or for the culture at large.

Michael Schulman is the author of the New York Times bestseller Her Again: Becoming Meryl Streep and a staff writer at The New Yorker, where he has contributed since 2006. His work has also appeared in the New York Times, Vanity Fair, and other publications. He lives in New York City.

"I devoured this book! Even for a pop culture obsessive like myself, it floored me in terms of how much I didn’t know about the history of Hollywood and the Academy Awards. The patterns it finds across the decades is surprising and delightful. Equally insightful and dishy, it is a must read for anyone interested in the shocking, absurd, thrilling and fascinating inner workings of the Hollywood machine." — Billy Eichner, comedian

"In an era of Hollywood upheaval, Michael Schulman turns out to be the perfect host for the Oscars. Deeply sourced, insightful and wildly entertaining, Oscar Wars traces the history of Hollywood’s biggest night from the demise of silent films through the camp debacle of Snow White, the Miramax insurgency and the pandemonium of 'the slap.' At once clear-eyed and dishy, this is the ideal resource for anyone who has always wanted to sneak backstage." — Emily Nussbaum, author of I Like to Watch

"On Oscar night, the true intrigues, hysterics and heartbreaks aren’t just in the films being honored, but in the behind the scenes jockeying for the awards. Schulman has the perfect eye and ear for the telling and entertaining dramas and light comedies leading up to Oscar victory." — Graydon Carter, former editor in chief of Vanity Fair and founder of Air Mail

"Michael Schulman’s book about the Oscars is just delicious—fast-paced and fun but also a serious, well-reported piece of cultural history. With wit and an impeccable sense of timing, Schulman appreciates the glamour without sugar-coating the grit. Entertaining and informative, the book provides welcome escapism without guilt." — Julie Salamon, author of The Devil’s Candy

“Her Again is a fascinating portrait of a very young Meryl Streep.” — Vogue on HER AGAIN

“A rollicking history of Streep’s early years . . . A love letter to a great actress and a behind-the-scenes study of iconic movies like Kramer vs. Kramer.” — People (book of the week) on HER AGAIN

“Schulman’s balanced portrait of Streep’s unwavering dedication and demanding work ethic makes this a must-read for fans and aspiring actors.” — Booklist on HER AGAIN

“Drawing on theater memoirs, conversations with Streep’s colleagues and friends, and heaps of interviews that Streep has given over the years, Schulman has fashioned a lively narrative. . . . Schulman’s sensitive handling of Streep’s personal life rounds out the portrait of a superbly talented woman. A brisk, gossipy, and entertaining biography.” — Kirkus Reviews on HER AGAIN

“An admiring but frank Hollywood origin story. Following Streep in her long journey from New Jersey cheerleader to Oscar winner (her first for the 1979 film Kramer vs Kramer), this is above all a tribute to smart, steadfast professional judgment.” — Financial Times (A Summer Pick of 2016) on HER AGAIN

“Michael Schulman shares delightfully entertaining stories surrounding Meryl Streep’s early rise to stardom in Her Again. . . . It’s an enchanting look into the intricate details of how a young girl from New Jersey became a force in the entertainment industry.’” — Associated Press on HER AGAIN

"[Schulman] honestly and engagingly examines each component of Streep’s professional development . . . He describes people and events with a cinematic flair, providing deeper insights into Streep as a woman as well as a consummate professional. This absorbing portrait of an iconic actress’s early years is essential for Streep fans" — Library Journal on HER AGAIN

“An insightful portrait…appreciative readers will undoubtedly hope that a follow-up volume is in the works.” — Publishers Weekly on HER AGAIN

“…thorough research with an eye for drama in this highly entertaining history of the Academy Awards…. The behind-the-scenes perspectives don’t skimp on juicy trivia while the connections Schulman draws to larger societal issues illustrate the power and limitations of cinema to reflect and drive change. This will thrill cinephiles.” — Publishers Weekly (starred review)

“Michael Shulman is one of the great profile-writers of our time, and one of our best writers, period . . . What Schulman, a student of personality, could accomplish in a study of the Oscars—that most official of personality contests—is limitless. It’s also just a perfect opportunity to spill so much celebrity gossip. I imagine devouring this book poolside, while sipping on a blue drink; a big umbrella overhead, a little umbrella in my glass.” — The Millions

“[a] unique talent for capturing Hollywood madness…you’re sure to find something of intrigue in Schulman’s comprehensive volume on that glittering, golden show, birthplace of the Moonlight fiasco and the slap heard ’round the world.” — Elle

“Educational and gleefully gossipy, this industry tell-all is a wildly entertaining ride.” — Buzzfeed

“…just in time for awards-show junkies to inject this delicious (and meticulously researched) bitchery straight into their veins.” — Entertainment Weekly