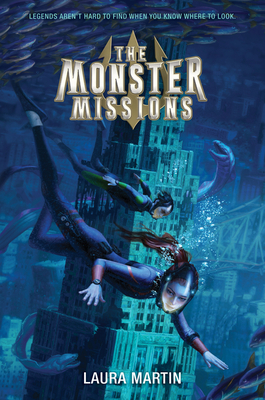 From the critically acclaimed author of Float and Glitch comes a new standalone adventure under the sea, perfect for fans of Gordon Korman and Dan Gutman!

Berkeley and her best friend, Garth, live on an old cruise ship, scavenging for supplies from the drowned cities left behind on the ocean floor after the sea swallowed up all the land. They think they’ve seen every kind of aquatic creature, but they never expected to find sea monsters…

After awakening a Hydra, Berkeley and Garth are sent to live on a submarine, where they study and hunt sea monsters. But the Hydra wants revenge on their home ship—and if it succeeds, their families will go down with it.

Berkley, Garth, and their crew must find a way to save the ship. But monsters aren’t the only deadly things lurking in the ocean’s depths.

Laura Martin is a mom by day and a middle grade author by night, although in her heart she will always be a seventh-grade language arts teacher. After spending six years teaching the fine art of dream chasing as a teacher, she is enjoying every minute of this lifelong dream of being an author. She lives in the Indianapolis area with her family. You can connect with her on Instagram @LauraMartinBooks or at www.lauramartinbooks.com.

"Martin positively pours the monsters into this action-oriented adventure, drawing on both outside sources and her imagination to engineer a nonstop series of brushes with boojums. As, along the way to a climactic rescue, the Britannica is rammed, swallowed whole, even attacked by pirates, Berkley plunges enthusiastically into both studies and narrow squeaks…leaving her well set up for future exploits and terrifying encounters."
— Kirkus Reviews

Praise for Glitch: "[Maintains] the energy of a sci-fi adventure and the complexity of historical fiction. The fast-paced plot features plucky, well-developed characters, and first-person narration works due to each character’s strong voice. Martin’s rules of time travel are simple enough for younger readers to follow, and the historical settings are comprehensive and thorough. With its dynamic plot, engaging characters, and sci-fi/historical fiction blend, this title will pull in a huge variety of readers, all of whom will be racing to see how the story ends." — School Library Journal (starred review)

"Martin expertly weaves the story through both Regan's and Elliot’s perspectives, capturing their innermost emotions, especially their motivations and fears. Their history-based missions and inevitable friendship will appeal to fans of action-packed dystopian stories like the Hunger Games trilogy or Ransom Riggs’ Miss Peregrine's Peculiar Children series. This is the “grown-up” version of the beloved Magic Tree House chapter books, and it doesn’t disappoint in honoring that legacy." — Booklist

"A solid choice for readers who like history with their mystery." — Kirkus Reviews

PRAISE FOR Hoax for Hire: “The author piles hoaxes atop hoaxes on the way to a climactic end. The McNeil motto, ‘Keep the Legends Alive,’ takes on new meaning for Grayson, as it will for readers.” — Booklist

“The family dynamics at play are convincing. The novel ends satisfyingly.” — Bulletin of the Center for Children’s Books

PRAISE FOR Float: “A fun, funny, and fast-paced summer camp romp full of pranks, plot-twists and goofy superpowers. Emerson’s adventures (and misadventures) teach us that the greatest power of all comes from the friends who push us to overcome our perceived limitations and make the most of every moment.” — John David Anderson, author of Ms. Bixby’s Last Day

“Simply superb. Martin’s novel feels exactly like summer camp should; the antics of the boys and the friendships they develop will make readers wish they were roasting marshmallows in the woods with their best friends.” — Booklist

“With lots of action, great dialogue, and plenty of humor, Martin’s style and tone are reminiscent of Gordon Korman and Dan Gutman.” — School Library Journal

“Martin conjures a sense of wonder and whimsy.” — Publishers Weekly

PRAISE FOR THE EDGE OF EXTINCTION SERIES: “Martin’s long-standing fascination with dinosaurs is delightfully evident, and her spunky human characters realistically interact with them. From one adrenaline-charged scene to another, the kids use their ingenuity to escape from or work with the prehistoric creatures. This exciting conclusion to Martin’s 2-part adventure series will keep readers on the edge of their seats.” — Booklist (on Code Name Flood)

“Martin continues to delight both dinosaur lovers and techno geeks with her effectively conceived and well-written tales. In this fun and fast-moving sequel to The Ark Plan, the adventure starts with a bang and never stops. An exciting thriller.” — School Library Journal (on Code Name Flood)

“In this clever take on Michael Crichton’s Jurassic Park, the tale is reimagined on a worldwide scale. The characters are developed, and the postapocalyptic world is well imagined and replete with detail. The plot moves forward briskly, with a few good twists, and the ending sets up neatly for a sequel. Nonstop action, marauding dinosaurs, and kids on the run: What’s not to like? This is a great buy for the sci-fi adventure-loving crowd.” — School Library Journal (on The Ark Plan)