Miss Butterworth and the Mad Baron: A Graphic Novel (Paperback) 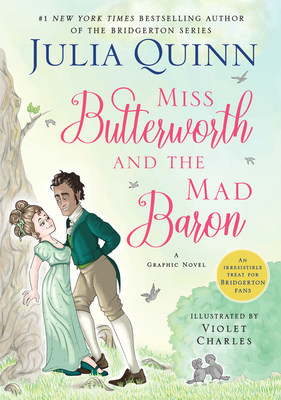 Miss Butterworth and the Mad Baron: A Graphic Novel (Paperback)

From #1 New York Times bestselling author Julia Quinn comes this irresistible treat, a charming and jaunty graphic novel, based on story snippets peppered throughout a number of her books. Originally mentioned in It’s in His Kiss—one of the Bridgerton novels which inspired the smash Netflix series Bridgerton—Miss Butterworth and the Mad Baron is finally told here in its entirety for the first time.

A madcap romantic adventure, Miss Butterworth and the Mad Baron has appeared in several Julia Quinn novels and enthralled some of her most beloved characters. Now this delicious tale of love and peril is available for everyone to enjoy in this wonderfully unconventional graphic novel.

Born into a happy family that is tragically ravaged by smallpox, Miss Priscilla Butterworth uses her wits to survive a series of outlandish trials. Cruelly separated from her beloved mother and grandmother, the young girl is sent to live with a callous aunt who forces her to work for her keep. Eventually, the clever and tenderhearted Miss Butterworth makes her escape . . . a daring journey into the unknown that unexpectedly leads her to the “mad” baron and a lifetime of love.

Delightfully illustrated by Violet Charles, told in Julia Quinn’s playful voice, Miss Butterworth and the Mad Baron is a high-spirited nineteenth-century romp that will entertain and enchant modern readers.

#1 New York Times bestselling author JULIA QUINN began writing one month after graduating from college and, aside from a brief stint in medical school, she has been tapping away at her keyboard ever since. Her novels have been translated into 43 languages and are beloved the world over. A graduate of Harvard and Radcliffe Colleges, she lives with her family in the Pacific Northwest.

Look for BRIDGERTON, based on her popular series of novels about the Bridgerton family, on Netflix.

“Quinn is in her usual fine form. The newly launched Netflix series will ensure more fans, but Nicholas and Georgie will be a hit with longtime readers and newcomers alike.”  — Library Journal (starred review) on First Comes Scandal

“Quinn continues to perfect her literary recipe for witty, entrancing historical romances as evidenced by the latest scintillating addition to her Bridgerton Prequel series.”  — Booklist on First Comes Scandal

“The Other Miss Bridgerton proved to be an unputdownable story that I think romance fans will treasure.”  — Harlequin Junkies

“If you need an escape during quarantine, the Bridgerton novels of Julia Quinn might just be the ticket.”  — EW.com