Girl Gurl Grrrl: On Womanhood and Belonging in the Age of Black Girl Magic (Paperback) 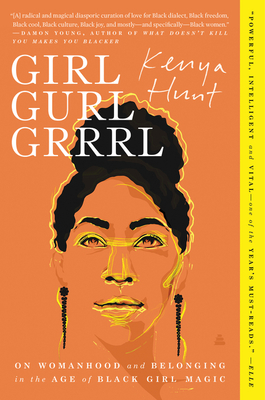 Girl Gurl Grrrl: On Womanhood and Belonging in the Age of Black Girl Magic (Paperback)

“One of the year’s must-reads.” –ELLE

In the vein of Roxane Gay’s Bad Feminist and Issa Rae’s The Misadventures of Awkward Black Girl, but wholly its own, a provocative, humorous, and, at times, heartbreaking collection of essays on what it means to be black, a woman, a mother, and a global citizen in today's ever-changing world.

Black women have never been more visible or more publicly celebrated than they are now. But for every new milestone, every magazine cover, every box office record smashed, every new face elected to public office, the reality of everyday life for black women remains a complex, conflicted, contradiction-laden experience.

An American journalist who has been living and working in London for a decade, Kenya Hunt has made a career of distilling moments, movements, and cultural moods into words. Her work takes the difficult and the indefinable and makes it accessible; it is razor sharp cultural observation threaded through evocative and relatable stories.

Girl Gurl Grrrl both illuminates our current cultural moment and transcends it. Hunt captures the zeitgeist while also creating a timeless celebration of womanhood, of blackness, and the possibilities they both contain. She blends the popular and the personal, the frivolous and the momentous in a collection that truly reflects what it is to be living and thriving as a black woman today.

Kenya Hunt is the Fashion Director of Grazia UK. Her career spans working for some of the media world's most influential women’s titles on both sides of the Atlantic from her post-graduate days as an Assistant Editor at the seminal magazine, Jane, to her years as Deputy Editor of ELLE UK. Her writing has appeared in The Guardian, The Evening Standard, Vogue and other publications. And she has made a number of appearances on BBC Woman’s Hour, Sky News and more. An American based in England, she lives south of the river in London with her husband and two sons.

“From its title and construction to its rhythms and its rigor, GIRL GURL GRRRL is a radical and magical diasporic curation of love for Black dialect, Black freedom, Black cool, Black culture, Black joy, and mostly--and specifically--Black women.” — Damon Young, author of What Doesn't Kill You Makes You Blacker

“In provocative and entertaining essays, an African-American fashion editor muses on the complex realities of being Black and female in today’s fast-changing world.” — People

“GIRL is an essential, vital and urgent exploration of Black womanhood, that should be on everyone’s reading list. Every page is meaningful and a call for empathy, hope and change. There is such power in the stories that are told, from Kenya’s own experience – as a mother, as a journalist, as an American in London, to Ebele Okobi’s essay on the unspeakable loss of a brother to police brutality. If any book should enrich – and disrupt – your life, let it be this.”  — Harper's Bazaar

“Powerful, intelligent and vital – one of the year’s must-reads.”  — Elle

“A provocative, heart-breaking and frequently hilarious collection of original essays on what it means to be black, a woman, a mother and a global citizen in today’s ever-changing world.”  — Glamour

“Hunt, a gifted storyteller, has a strong voice all her own, and she explores a host of current concerns, including Black grief and ‘what happens when the Internet and social media do the eulogizing.’ Amid the ‘angst and chaos,’ Hunt hopes readers also see Black women as people who are ‘loving…growing, and finding the meaning in life as we go.’ And we do see their fullness in this collage of insightful analyses of the messy places where race, culture, and technology intersect. A powerful collection that is very much of the present moment of resistance but will also endure.” — Kirkus Reviews (starred review)

“Hunt, deputy editor of the fashion magazine Grazia UK, debuts with a rich collection of personal essays about her life and career. . . . Hunt’s work will broaden perspectives and inspire readers.” — Publishers Weekly

"The book truly shines.... Her writing is conversational, yet impactful. The span of the book makes readers feel like they're catching up with an old friend while gaining an insightful education on the complicated ways modern Black women move throughout the world." — Booklist

"This thought-provoking collection of ruminations from Black women on how they thrive and struggle in the complex world today is particularly relevant to this moment but will remain an important text for years to come." — Library Journal

"Girl Gurl Grrrl is unapologetically Black, because Hunt wants Black women to know they have nothing to apologize for."   — Bust Magazine

“A mother of two, Hunt is a gifted storyteller with an intimate voice, akin to a girlfriend chatting over a few glasses of wine.” — Minneapolis Star Tribune

“By sharing how everyday Black women resist, persist and uplift one another, Hunt inspires the world to see them, and see them equally.” — Shelf Awareness