Not Dark Yet: A Novel (Inspector Banks Novels #27) (Hardcover) 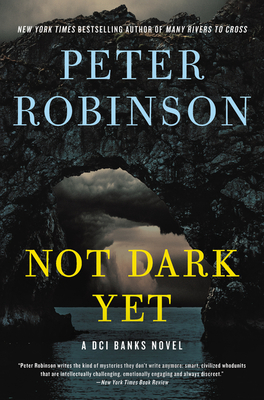 Not Dark Yet: A Novel (Inspector Banks Novels #27) (Hardcover)

This is book number 27 in the Inspector Banks Novels series.

“Robinson is an author with amazing empathy, a snare-trap ear for dialogue, and a clear eye for the telling detail.”—Michael Connelly

One of the world's greatest suspense writers returns with the 27th novel featuring the legendary detective Alan Banks in the mystery series Stephen King calls “the best now on the market.”

When property developer Connor Clive Blaydon is found dead, Detective Chief Inspector Alan Banks and his Yorkshire team dive into the investigation. As luck would have it, someone had installed a cache of spy-cams all around his luxurious home. The team hope that they’ll find answers—and the culprit—among the video recordings.

Instead of discovering Connor’s murderer, however, the grainy and blurred footage reveals another crime: a brutal rape. If they can discover the woman’s identity, it could lead to more than justice for the victim; it could change everything the police think they know about Connor and why anyone would want him dead.

Meanwhile, tensions are rising between Banks and his friend, Zelda. A super recognizer—able to recognize faces significantly better than most people—Zelda is determined to bring the men who abused her to justice. But stirring up the murky waters of the past will put her in far greater danger than ever before, and Banks worries that he won’t be able to stop her from plunging too deep before it’s too late.

“Robinson is an author with amazing empathy, a snare-trap ear for dialogue, and a clear eye for the telling detail.”
— Michael Connelly

"Reliable procedural entertainment from a pro’s pro, with an ending that guarantees more drama ahead.”
— Kirkus Reviews on Many Rivers to Cross

“Engrossing... Those who enjoy methodical police procedurals that build to a logical, satisfying conclusion will be amply rewarded.”
— Publishers Weekly on Careless Love

“As usual, Robinson provides a solid police procedural enhanced by the rugged Yorkshire setting. Banks himself—jazz and solitude-loving, difficult, somewhat melancholic, unlucky in love—is always fascinating... [F]or series fans, this one is a sure bet.”
— Booklist on Careless Love

“Robinson fans will enjoy the latest entry in this long-running series...Well-written and believable, with recognizable but multifaceted characters and enough twists to keep the story riveting until the mystery is solved.”
— Library Journal on Careless Love

“Well-written and believable, with recognizable but multifaceted characters and enough twists to keep the story riveting until the mystery is solved.”
— Library Journal on Careless Love

“Careless Love is another entertaining novel in the Inspector Banks series.”
— The Hamilton Spectator on Careless Love