How the Wallflower Was Won (Last Chance Scoundrels #2) (Mass Market) 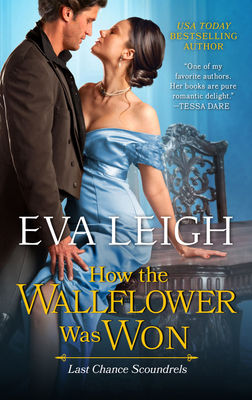 How the Wallflower Was Won (Last Chance Scoundrels #2) (Mass Market)

This is book number 2 in the Last Chance Scoundrels series.

USA TODAY bestselling author Eva Leigh continues her Last Chance Scoundrels series with a steamy romance between two opposites—a rogue with a taste for wagers and a bookish wallflower—who marry for convenience... but neither bet on falling in love.

Finn Ransome is an expert on Lady Luck, which is why he refuses to take a chance on love. Experience has taught him that he’s happier at a gaming table than around people he will, inevitably, disappoint. However, the clock is ticking on his father’s matrimonial demands. But the only woman to catch his eye is a bluestocking who would never consider a rogue like him.

After a disastrous first Season, Tabitha Seaton decided to focus on books instead of ballrooms. She hopes to join the Sterling Society, a collective of the most brilliant, influential minds in London. Except, they will never admit an unmarried lady. Now Tabitha needs a husband, and a notorious, handsome gambler may be her best bet.

Finn and Tabitha are opposites who have no intention of wagering on a love match, and a calculated marriage of convenience solves all their problems—with no risk to their hearts. Once married, however, their potent attraction boils over into a deep passion that neither expected. When a painful mistake drives the new lovers apart, Finn will risk it all to prove a scoundrel and a wallflower are a winning pair...

Eva Leigh is a USA Today bestselling romance author who has always loved historical romance. She writes novels chock-full of determined women and men who are here for it. She enjoys baking, spending too much time on the Internet, and listening to music from the '80s. Eva and her husband live in Central California.

Visit her on the web at http://evaleighauthor.com

“A woman bargains for her freedom from society’s gilded cage in Leigh’s smart and sizzling introduction to her Last Chance Scoundrels regency series... That Kieran and Celeste’s love affair is born of mutual respect and admiration only enhances the sensual love scenes. This risqué romp will have readers hooked.” — Publishers Weekly (starred review) on The Good Girl’s Guide to Rakes

“Many romances explore young women fighting against the patriarchal standards that dictate their lives. This story not only does that with aplomb, but also considers the intersection of gender and class... Delightful dirty talk and dazzling prose contribute to making this book a standout. A captivating series kickoff from an author soaring to a new level of excellence.” — Kirkus Reviews (starred review) on The Good Girl’s Guide to Rakes

“Leigh’s heroines are complex, vivid characters who seem to have stepped out of an enviable time and place, and not just because of all the satisfying, sexy romance they get to have.” — Sarah MacLean, Washington Post, on From Duke Till Dawn

“My Fake Rake is a feast of female empowerment, positive friendships, feel-good moments, and social satire. And as the first book in a series, it builds a delicious world you'll want to come back to—hopefully because the delightful supporting characters will get their own stories next.” — NPR

“A jolt of electricity, a blast of fresh air—everything delightful and exciting you could want it to be.”  — New York Times Book Review

“Leigh consistently crafts whip-smart heroines and irresistible heroes delivered in packages bursting with wicked wit, feminist leanings, and sex positivity... For any who question whether historical romance is outdated or can be feminist, look no further than Eva Leigh’s work – while maintaining assiduous historical accuracy, she delivers intoxicating yarns that bulldoze tropes and flip gender expectations on their head.” — Entertainment Weekly