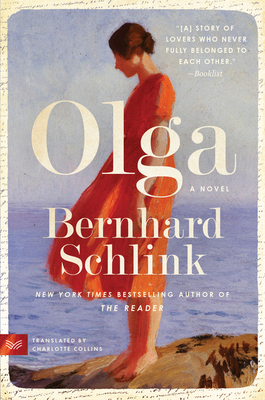 “A brilliant novel about history and the nature of memory.”—Evening Standard

A sweeping novel of love and passion from author of the international bestseller The Reader about a woman out of step with her time, whose life is witness to some of the most tumultuous events of modern age.

Abandoned by her parents, young Olga is raised by her grandmother in a Prussian village in the early years of the twentieth century. Smart and precocious, endearing but uncompromising, she fights against ingrained chauvinism to find her place in a world run by lesser men.

When Olga falls in love with her neighbor, Herbert, the son of a local aristocrat, her life is irremediably changed. While Herbert indulges his thirst for exploration and adventure, Olga is limited by her gender and circumstance. Her love for Herbert goes against all odds and encounters many obstacles, but even when they are separated, it endures

Unfolding across decades—from the late nineteenth to the early twenty-first century—and across continents—from Germany to Africa and the Arctic, from the Baltic Sea to the German south-west—Olga is an epic romance, and a wrenching tale of a woman’s devotion to a restless man in an age of constant change. Though Olga exists in the shadows of others, she pursues life to the fullest and her magnetic presence shines—revealing a woman complex, fascinating, and unforgettable.

Told in three distinct parts, brilliantly shifting from different points of view and narrative formats, Bernhard Schlink’s magnificent novel is a rich, full portrait of a singular woman and her world.

Translated from the German by Charlotte Collins

Bernhard Schlink was born in Germany in 1944. A professor emeritus of law at Humboldt University, Berlin, and Cardozo Law School, New York, he is the author of the The Reader, which became a multi-million copy international bestseller and an Oscar-winning film starring Kate Winslet and Ralph Fiennes, and The Woman on the Stairs. He lives in Berlin and New York.

“Readers who love rich character studies will want to pick this up." — Publishers Weekly

"Olga is captivating. Bernhard Schlink tells the story in lucid, serene language... He is a master" — Stern

"One of Bernhard Schlink's secrets stems from his ability to craft stories from the generational schisms that occupied a single lifetime. Olga is another stellar example of it." — Le Monde

"A cleverly-constructed tale of cross-class romance... Olga's story draws us into a present-day reckoning with Germany's past."
— Mail on Sunday

“A poignant portrait of a woman out of step with her time.” — The Guardian

"From the author of The Reader comes a brilliant new novel about history and the nature of memory." — Evening Standard (London)

"Schlink frames the novel as a search for meaning, which dances in Olga between a multitude of timeframes and territories. Throughout, Charlotte Collins's translation is careful and beautifully paced." — Financial Times

"A compelling tale of love and thwarted dreams... Schlink's lucid, no-frills prose lends his novel immediacy, and at times potency, and gives us a character to root for."
— The Herald (UK)

"Schlink tells a gripping, true-to-life story which startles you with its unforeseen twists, and not only makes you think, but feel too."
— NDR Kultur

"Olga is a searching examination of modern Germany and its scarred soul... there's a sophisticated precision to [Schlink's] writing, which is superbly translated by Charlotte Collins." — Sunday Telegraph

“Misdirection can be as useful a trick in storytelling as it is in magic. It may be tempting to follow the trail of a character who plunges into the thick of the action, but sometimes it’s better to stick with the one who has been left behind. That’s certainly the case in Bernhard Schlink’s Olga.” — New York Times Book Review