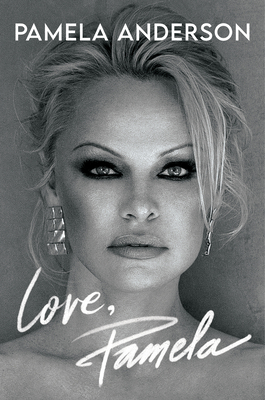 The actress, activist, and once infamous Playboy Playmate reclaims the narrative of her life in a memoir that defies expectation in both content and approach, blending searing prose with snippets of original poetry.

“The iconic Anderson uses a mixture of poetry and prose to present an impressionistic view of a fascinating life.”-BOOKLIST, *starred*

In this honest, layered and unforgettable book that alternates between storytelling and her own poetry, Pamela Anderson breaks the mold of the celebrity memoir while taking back the tale that has been crafted about her.

Her blond bombshell image was ubiquitous in the 1990s. Discovered in the stands of a football game, she was immediately rocket launched into fame, becoming Playboy’s favorite cover girl and an emblem of Hollywood glamour and sexuality. But what happens when you lose grip on your own life—and the image the notoriety machine creates for you is not who you really are?

Growing up on Vancouver Island, the daughter of young, wild, and unprepared parents, Pamela Anderson’s childhood was not easy, but it allowed her to create her own world—surrounded by nature and imaginary friends. When she overcame her deep shyness and grew into herself, she fell into a life on the cover of magazines, the beaches of Malibu, the sets of movies and talk shows, the arms of rockstars, the coveted scene at the Playboy Mansion. And as her star rose, she found herself tabloid fodder, at the height of an era when paparazzi tactics were bent on capturing a celebrity’s most intimate, and sometimes weakest moments. This is when Pamela Anderson lost control of her own narrative, hurt by the media and fearful of the public’s perception of who she was…and who she wasn’t.

Fighting back with a sense of grace, fueled by a love of art and literature, and driven by a devotion to her children and the causes she cares about most, Pamela Anderson has now gone back to the island where she grew up, after a memorable run starring as Roxie in Chicago on Broadway, reclaiming her free spirit but also standing firm as a strong, creative, confident woman.

PAMELA ANDERSON is an international icon whose work spans both entertainment and activism. Through the Pamela Anderson Foundation, she champions causes close to her heart, including ocean and rain forest conservation and the protection of vulnerable humans and animals. Above all else, being a mother to sons Brandon Thomas Lee and Dylan Jagger Lee has been Pamela’s priority and greatest source of pride.

The most disappointing thing about Love, Pamela is that it doesn’t come in a form that can be injected directly into your veins… Dazzling. — New York Times

According to the acknowledgments, this memoir started as ‘a fifty-page poem and then grew into hundreds of pages of…more poetry.’ Readers will be glad that Anderson eventually turned to writing prose, since the well-told anecdotes and memorable character sketches are what make it a page-turner. her account of this kooky, messed-up, enviable, and often thrilling life, her humility never fails her. A juicy story with some truly crazy moments, yet Anderson's good heart shines through. — Kirkus Reviews

[A] pensive memoir. This poetic and free-spirited narrative reflects both Anderson’s naivete and her wild spirit. — Publishers Weekly

Reveals the woman behind the iconic image in this intimate and well-written journey of self-discovery, uncovering the layers that make up her complicated past and sharing her lifelong thirst for knowledge. Anderson fully takes control of her own story, addressing the salacious aspects but also sharing inspiring tales of survival, motherhood, and activism. — Library Journal

The iconic Anderson uses a mixture of poetry and prose to present an impressionistic view of a fascinating life…the book paints a picture of a wild spirit, a proud mother, and a seeker that will draw in fans and those who have misunderstood this complicated woman. — Booklist