Queen of Thieves: A Novel (Paperback) 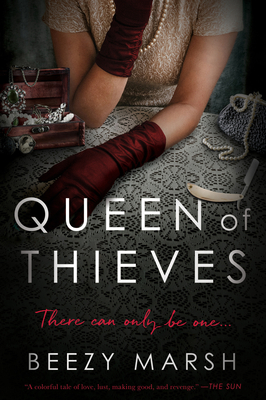 Queen of Thieves: A Novel (Paperback)

An electrifying historical adventure about a ring of bold and resourceful women thieves in post-World War II London.

Gangland was a man’s world. Or so they thought. The women knew different.

London, 1946. The city struggles to rebuild itself after the devastation of the Blitz. Food is rationed, good jobs are scarce, and even the most honest families are forced to take a bit of “crooked” just to survive.

Alice Diamond, the Queen of Thieves, rules over her all-female gang with a bejeweled fist. Her “hoisters” are expert shoplifters, the scourge of London’s upscale boutiques and departments stores. Their lucrative business stealing and fencing luxury goods always carries the threat of violence; Alice packs a razor, and has been known to use her heavy rows of diamond rings like brass knuckles.

Young Nell is a teenager from the slums, hiding a secret pregnancy and facing a desperately uncertain future when Alice takes her under her wing. Before long, Nell is experiencing all the dangers—and glamourous trappings—that comes with this underworld existence. Alice wants Nell to be a useful weapon in her ongoing war against crime boss Billy Sullivan’s gang of rival thieves. But Nell has a hidden agenda of her own, and is not to be underestimated. The more she is manipulated by both Alice and Billy, the more her hunger for revenge grows.

As Nell embraces the rich spoils of crime and the seedy underbelly of London, will she manage to carve out her own path to power and riches? Might she even crown herself the Queen of Thieves?

Beezy Marsh is a #1 internationally and Sunday Times top ten bestselling author. She is also an award-winning journalist who has written for The Daily Mail and the Sunday Times. Beezy is married with two young sons and lives in Oxfordshire.

"A colourful tale of love, lust, making good and revenge." — The Sun (UK)

"Gripping from the first page." — The Lady (UK)