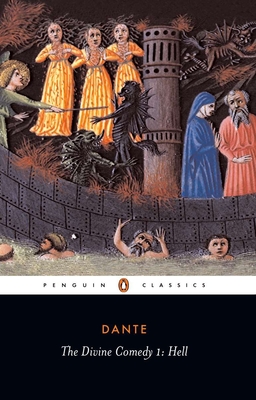 Guided by the poet Virgil, Dante plunges to the very depths of Hell and embarks on his arduous journey towards God. Together they descend through the nine circles of the underworld and encounter the tormented souls of the damned - from heretics and pagans to gluttons, criminals and seducers - who tell of their sad fates and predict events still to come in Dante’s life. In this first part of his Divine Comedy, Dante fused satire and humour with intellect and soaring passion to create an immortal Christian allegory of mankind’s search for self-knowledge and spiritual enlightenment.

For more than seventy years, Penguin has been the leading publisher of classic literature in the English-speaking world. With more than 1,700 titles, Penguin Classics represents a global bookshelf of the best works throughout history and across genres and disciplines. Readers trust the series to provide authoritative texts enhanced by introductions and notes by distinguished scholars and contemporary authors, as well as up-to-date translations by award-winning translators.
Dante Alighieri was born in Florence in 1265 and belonged to a noble but impoverished family. He was married when he was around twenty to Gemma Donati and had four children. He met Beatrice, who was to be his muse, in 1274, and when she died in 1290 he sought distraction in philosophy and theology, and wrote La Vita Nuova. He worked on the Divine Comedy from 1308 until near the time of his death in Ravenna in 1321.

Barbara Reynolds was Lecturer in Italian at Cambridge University and subsequently Reader in Italian Studies at Nottingham, and Honorary Reader at Warwick. She has written books, both on Italian authors and on Dorothy L. Sayers.
“The English Dante of choice.” –Hugh Kenner

“Exactly what we have waited for these years, a Dante with clarity, eloquence, terror, and profoundly moving depths.” –Robert Fagles, Princeton University

“A marvel of fidelity to the original, of sobriety, and truly, of inspired poetry.” –Henri Peyre, Yale University