A Life in the Bush: Lessons from My Father (Paperback) 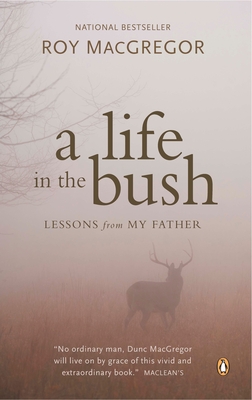 A Life in the Bush: Lessons from My Father (Paperback)

In 1929, at the age of twenty-two, Duncan MacGregor, the son of a lumberman, great-grandson of a voyageur, and an avid reader and baseball fan, headed off into the largest tract of preserved bush in the world: Ontario’s Algonquin Park. When he got there, he was home for the rest of his life.

From the true nature of fishing to the harsh realities of raising a family in the woods, from the role of fear in the bush to the small nuances of family relationships, A Life in the Bush is painted on a canvas both vast and richly detailed. A story that captures the tough physical demands, the rich life of the senses, and the unselfconscious freedom that comes from living apart from town and city.

In this beautifully crafted memoir of his father, Roy MacGregor paints an intimate portrait of an unusual man and spins a spellbinding tale of a boy’s complex relationship with his father. He also evokes, perhaps for the first time in Canadian literature, the bush the way bush people see it, an insider's view of life in the totemic Canadian wilderness.

ROY MACGREGOR is the acclaimed and bestselling author of Home Team: Fathers, Sons and Hockey (shortlisted for the Governor General's Literary Award); A Life in the Bush (winner of the US Rutstrum Award for Best Wilderness Book and the CAA Award for Biography); and Canadians: A Portrait of a Country and Its People; as well as two novels, Canoe Lake and The Last Season, and the popular Screech Owls mystery series for young readers. MacGregor has been a regular columnist at The Globe and Mail since 2002; MacGregor's journalism has garnered four National Magazine Awards and two National Newspaper Awards. He is an Officer of the Order of Canada, and was described in the citation as one of Canada's "most gifted storytellers." He and his wife, Ellen, live in Kanata.
NATIONAL BESTSELLER
WINNER OF THE CAA-BIRKS FAMILY FOUNDATION AWARD FOR BIOGRAPHY
WINNER OF THE OTTAWA-CARLTON BOOK AWARD
WINNER OF THE RUTSTRUM AWARD FOR BEST WILDERNESS BOOK

“A portrait of a true original.” —The Hamilton Spectator