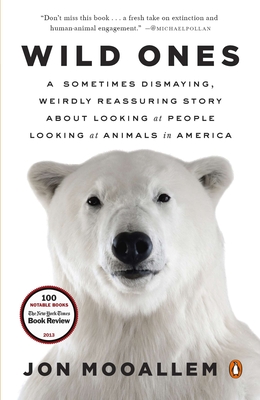 
Email or call for price
"Intelligent and highly nuanced… This book may bring tears to your eyes." -- San Francisco Chronicle

Journalist Jon Mooallem has watched his little daughter’s world overflow with animals butterfly pajamas, appliquéd owls—while the actual world she’s inheriting slides into a great storm of extinction. Half of all species could disappear by the end of the century, and scientists now concede that most of America’s endangered animals will survive only if conservationists keep rigging the world around them in their favor. So Mooallem ventures into the field, often taking his daughter with him, to move beyond childlike fascination and make those creatures feel more real. Wild Ones is a tour through our environmental moment and the eccentric cultural history of people and wild animals in America that inflects it—from Thomas Jefferson’s celebrations of early abundance to the turn-of the-last-century origins of the teddy bear to the whale-loving hippies of the 1970s. With propulsive curiosity and searing wit, and without the easy moralizing and nature worship of environmental journalism’s older guard, Wild Ones merges reportage, science, and history into a humane and endearing meditation on what it means to live in, and bring a life into, a broken world.
Jon Mooallem has been a contributing writer to The New York Times Magazine since 2006 and is a writer at large for Pop-Up Magazine, the live magazine in San Francisco. He’s also contributed to This American Life, The New Yorker, Harper’s, Wired, and many other magazines. He and his family live in San Francisco.

"[An] ambitious and fascinating first book… [Mooallem] seamlessly blends reportage from the front lines of wildlife conservation with a lively cultural history of animals in America, telling stories of people past and present whose concern for animals makes them act in ways that are sometimes unexpected, sometimes heroic, and occasionally absurd."—New York Times Book Review

"A thoughtful parable of Americans’ complicated relations with conservationists and the wildlife they protect."—The New Yorker

"Intelligent and highly nuanced… This book may bring tears to your eyes. If so, they will be drawn out by the tragedy of what we have done and the all-too-often pathetic efforts to turn back the clock. But read through the tears, and you will find yourself more informed, more prepared to make a difference. Mooallem has done those of us who care deeply about nature and wildlife a favor, leaving us justifiably off balance but putting us in a better position to move beyond hubris to pragmatic solutions."—San Francisco Chronicle

"An engaging nature/environment book that goes beyond simple-minded sloganeering."—Kirkus

"Wild Ones heightens one’s awareness of the precipitous position of so many of our animal species, but it’s also filled with curiosity and hope. The men and women that Mooallem tails are dreamers, but you wind up rooting for them to keep on dreaming."—Smithsonian

"There is, in short, ridiculously lots to love about Jon Mooallem’s Wild Ones—starting with its thoughtful and troubling observation that our increasingly extravagant effort at species conservation is a corollary to, as much as a solution for, our habit of rendering wild animals extinct."—New York Magazine

"Mooallem argues conservation is and always has been about fulfilling people’s need for nostalgic wildness, however contrived and fictitious it may be. Every generation strives to return the Earth to some idealized former state. Although his journey is sobering, Mooallem’s conclusion is upbeat: Even small conservation victories matter."—Discover

"Mooallem manages to pinpoint something peculiar yet poignant about being human, and as a result, reading his pieces often feels like being tricked by an approachable wink masking a sharp jab to the gut... Be prepared to be surprise-gutted."—East Bay Express

"A clear-eyed look at our coy relationship with endangered animals."—Nature

"If I could write this review entirely in smiley faces and majestic animal emojis, I would: Wild Ones is easily one of the best books I've come across this year. It's more readable than most novels, stuffed with more fascinating, offbeat trivia than the last three issues of The New Yorker combined….It's incredibly well-researched, relevant, challenging stuff."—Portland Mercury

"'If we choose to help [polar bears] survive,' Mooallem writes, 'it will require a kind of narrow, hands-on management—like getting out there and feeding them.' Among a lot of environmentalists, those are fighting words. All respect to Mooallem for having the guts to say them.”—Outside Magazine

"This book is dense with both thought and fact… It is written with a vernacularly light touch, shot through with compassion and wit, not to mention open amazement, the only apt response to the story of our monumental hubris."—The Daily Beast

"Mooallem argues that by focusing on the animals themselves, we are overlooking the point of the Endangered Species Act, which stressed the paramount importance of ecosystems—a far more difficult thing to save than a species. He strives for the big picture here and gently guides readers through what ultimately becomes a poignant tribute to all who try to make the world a better place. This is a wise approach to a troubling subject, and Mooallem’s words do give us something to hold on to as we continue to struggle with what it means to save the planet."—Booklist

"It is impossible to express, within the tiny game-park confines of a back cover, how amazing I find this book. I love it line by perfect, carefully crafted line, and I love it for the freshness and intelligent humanity of its ideas. As literary nonfiction, as essay, as reportage, Wild Ones is, to my mind, about as good as writing gets."—Mary Roach, author of Stiff and Gulp

"I love Jon Mooallem and I love animals, but this book is even better than the sum of its parts. Mooallem makes a persuasive case that wild animals are America's cultural heritage—our Sistine Chapel and our Great Books—and the story he tells is an archetypal American one. Even as the animals are being destroyed by unthinking, unconscious corporate forces, they are also being rescued through the tremendous energy and ingenuity of individuals, men and women who wear whooping-crane costumes, cohabitate with dolphins, and encourage condors to ejaculate on their heads. Wild Ones made me proud to be American."—Elif Batuman, author of The Possessed

"Part harrowing arctic adventure, part crazy airborne travelogue, and often funny family trek, Wild Ones shows us that while saving species might be of debatable value to some, it is maybe in our genes, and definitely in our hearts. Mooallem's analysis of our various environmental movements has the breadth and penetrating clarity of Michael Pollan, but more importantly he makes us wonder even more about a world that is in desperate need of more wonder."—Robert Sullivan, author of Rats and My American Revolution

"During the course of his three expeditions, Jon Mooallem collects in the specimen jars of his elegant paragraphs enough ironies, curiosities, insights, and revelations—enough life, wild and otherwise—to stock a mind-altering museum, one unlike any other, in which Martha Stewart has wandered into the polar bear exhibit, and the Hall of North American Animals turns out also to be a hall of mirrors. With Mooallem as your nature guide, you won't look at wild animals—or at Homo americanus—quite the same way again."—Donovan Hohn, author of Moby-Duck