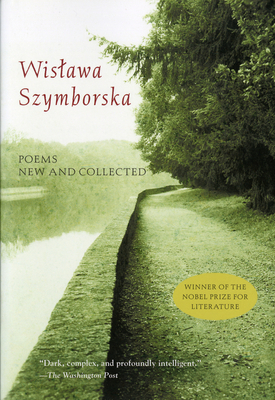 
Email or call for price
Poems New and Collected: 1957-1997 is the definitive, complete collection of poetry by Nobel Prize-winning poet Wislawa Szymborska.

Described by Robert Hass as "unquestionably one of the great living European poets" and by Charles Simic as "one of the finest poets living today," Szymborska mesmerizes her readers with poetry that captivates their minds and captures their hearts.

This is the book that her many fans have been anxiously awaiting, including 164 poems in all, as well as the full text of her Nobel acceptance speech of December 7, 1996, in Stockholm. Beautifully translated by Stanislaw Baranczak and Clare Cavanagh, who won a 1996 PEN Translation Prize for their work, this volume is a must-have for all readers of poetry.

WISLAWA SZYMBORSKA (1923–2012) was born in Poland and worked as a poetry editor, translator, and columnist. She was awarded the Nobel Prize in Literature in 1996. Her books include Monologue of a Dog, Map: Collected and Last Poems, and Poems New and Collected: 1957–1997.