The Community of Advantage: A Behavioural Economist's Defence of the Market (Hardcover) 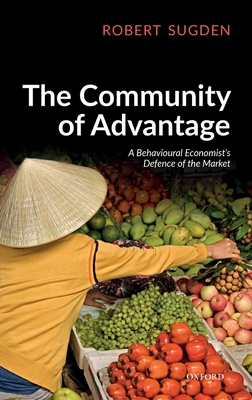 The Community of Advantage: A Behavioural Economist's Defence of the Market (Hardcover)


Usually Ships in 1-5 Days
The Community of Advantage asks how economists should do normative analysis. The growing consensus in favour of paternalism and 'nudging' has urged normative analysis towards the satisfaction of individual's preferences. Its conclusions have supported a long-standing liberal tradition of economics that values economic freedom and views markets favourably. However, behavioural research shows that individuals' preferences, as revealed in choices, are often unstable, and vary according to contextual factors that seem irrelevant for welfare. Robert Sugden proposes a reformulation of normative economics that is compatible with what is now known about the psychology of choice. Reformulations that assume that people have well-defined 'latent' preferences which, because of psychologically-induced errors, are not always revealed in actual choices. According to these reformulations, the economist's job is to reconstruct latent preferences and to design policies to satisfy them. Challenging the controversial idea of using behavioural insights to guide public policy The Community of Advantage argues that latent preference and error are psychologically ungrounded concepts, and that economics needs to be more radical in giving up rationality assumptions. Sugden advocates a kind of normative economics that does not use the concept of preference. Its recommendations are addressed, not to an imagined 'social planner', but to citizens, viewed as potential parties to mutually beneficial agreements. Its normative criterion is the provision of opportunities for individuals to participate in voluntary transactions. Using this approach, Sugden reconstructs many of the normative conclusions of the liberal tradition. He argues that a well-functioning market economy is an institution that individuals have reason to value, whether or not their preferences satisfy conventional axioms of rationality, and that individuals' motivations in such an economy can be cooperative rather than self-interested.

Robert Sugden, Professor of Economics, University of East Anglia Robert Sugden is Professor of Economics at the University of East Anglia, Norwich. He has been a prominent behavioural and experimental economist since the pioneering era of the 1980s. He is also well known for his work in economic theory, methodology of economics, and philosophy of economics. He is the author of The Economics of Rights, Cooperation and Welfare, Experimental Economics: Re-thinking the Rules, and many papers in leading journals of economics and philosophy. Recently his work has focused on reformulating normative economics so that it avoids unrealistic assumptions about individual rationality without becoming paternalistic.