Military Ethics: What Everyone Needs to Know (Paperback) 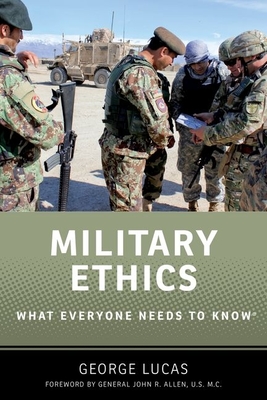 Military Ethics: What Everyone Needs to Know (Paperback)

Dr. Lucas was a professor of ethics at the U.S. Naval Academy and president of the International Society of Military Ethics. In this impressive book, he outlines the history of ethical reflection on war and the foundations of the international laws of armed conflict. He clarifies the considerations that are supposed to guide decisions by government leaders on whether or not to wage war, and the rules that military professionals must follow in their conduct of war. Additionally, he explores several contemporary issues regarding humanitarian military interventions, armed drone aircraft, and cyber weapons. Lucas helps us to interpret incidents of war around the world, to evaluate debates about war in our media, and to exercise our influence as citizens. ~David

— From Newest Staff Recommendations!
What significance does ethics have for the men and women serving in the military forces of nations around the world? What core values and moral principles collectively guide the members of this military profession? This book explains these essential moral foundations, along with just war theory, international relations, and international law. The ethical foundations that define the Profession of Arms have developed over millennia from the shared moral values, unique role responsibilities, and occasional reflection by individual members the profession on their own practices - eventually coming to serve as the basis for the Law of Armed Conflict itself. This book focuses upon the ordinary men and women around the world who wear a military uniform and are committed to the defense of their countries and their fellow citizens. It is about what they do, how they do it, what they think about it, how they behave when carrying out their activities, and how they are expected to behave, both on and off the battlefield (whether in, or out of, uniform) - and what everyone (and not just military personnel themselves) needs to know about this. The book also examines how military personnel are treated and regarded by those whom they have sworn to defend and protect, as well as how they treat and regard one another within their respective services and organizational settings. Finally, the book discusses the transformations in military professionalism occasioned by new developments in armed conflict, ranging counterinsurgency warfare and humanitarian military intervention, to cyber conflict, military robotics, and private military contracting. From China to Russia, author George Lucas effectively sheds light on today's military ethics in existence throughout the world. What Everyone Needs to Know(R) is a registered trademark of Oxford University Press.

George Lucas is Professor Emeritus, and formerly held the Distinguished Chair in Ethics at the U.S. Naval Academy. He is currently President of the original chapter of the International Society for Military Ethics (ISME), and editor of the new Routledge Handbook of Military Ethics (2015), containing contributions from military leaders and civilian scholars and educators around the world. He is currently Visiting Distinguished Research Professor at the Reilly Center for Science, Technology and Values at Notre Dame University, and a visiting fellow in the Inamouri Center for Ethics at Case Western University.