On Form: Poetry, Aestheticism, and the Legacy of a Word (Paperback) 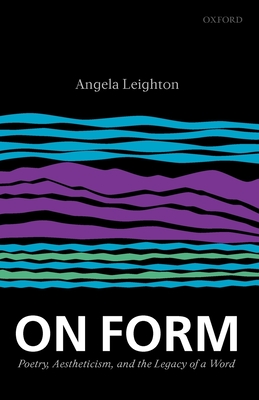 On Form: Poetry, Aestheticism, and the Legacy of a Word (Paperback)


Usually Ships in 1-5 Days
What is form? Why does form matter? In this imaginative and ambitious study, Angela Leighton assesses not only the legacy of Victorian aestheticism, and its richly resourceful keyword, 'form', but also the very nature of the literary. She shows how writers, for two centuries and more, have
returned to the idea of form as something which contains the secret of art itself. She tracks the development of the word from the Romantics to contemporary poets, and offers close readings of, among others, Tennyson, Pater, Woolf, Yeats, Stevens, and Plath, to show how form has provided the single
most important way of accounting for the movements of literary language itself. She investigates, for instance, the old debate of form and content, of form as music or sound-shape, as the ghostly dynamic and dynamics of a text, as well as its long association with the aestheticist principle of being
'for nothing'. In a wide-ranging and inventive argument, she suggests that form is the key to the pleasure of the literary text, and that that pleasure is part of what literary criticism itself needs to answer and convey.

Angela Leighton is Senior Research Fellow at Trinity College, Cambridge. She is the author of a number of books, including Shelley and the Sublime, Elizabeth Barrett Browning and Victorian Women Poets: Writing Against the Heart, as well as many essays on nineteenth and twentieth-century literature.