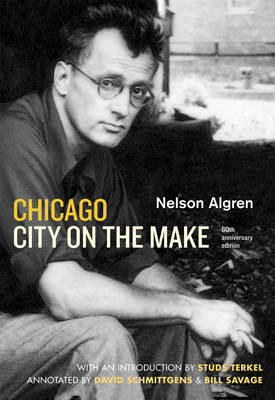 “Once you’ve become a part of this particular patch, you’ll never love another. Like loving a woman with a broken nose, you may well find lovelier lovelies. But never a lovely so real.”

Ernest Hemingway once said of Nelson Algren’s writing that “you should not read it if you cannot take a punch.” The prose poem, Chicago: City on the Make, filled with language that swings and jabs and stuns, lives up to those words. In this sixtieth anniversary edition, Algren presents 120 years of Chicago history through the lens of its “nobodies nobody knows”: the tramps, hustlers, aging bar fighters, freed death-row inmates, and anonymous working stiffs who prowl its streets.

Upon its original publication in 1951, Algren’s Chicago: City on the Make was scorned by the Chicago Chamber of Commerce and local journalists for its gritty portrayal of the city and its people, one that boldly defied City Hall’s business and tourism initiatives. Yet the book captures the essential dilemma of Chicago: the dynamic tension between the city’s breathtaking beauty and its utter brutality, its boundless human energy and its stifling greed and violence.

The sixtieth anniversary edition features historic Chicago photos and annotations on everything from defunct slang to Chicagoans, famous and obscure, to what the Black Sox scandal was and why it mattered. More accessible than ever, this is, as Studs Terkel says, “the best book about Chicago.”

Nelson Algren (1909–81) won the National Book Award in 1950 for The Man with the Golden Arm. His works include A Walk on the Wild Side, The Neon Wilderness, and Chicago: City on the Make, the last published by the University of Chicago Press. David Schmittgens teaches English at St. Ignatius College Prep in Chicago. Bill Savage is a senior lecturer at Northwestern University and coeditor of the fiftieth anniversary critical edition of The Man with the Golden Arm.