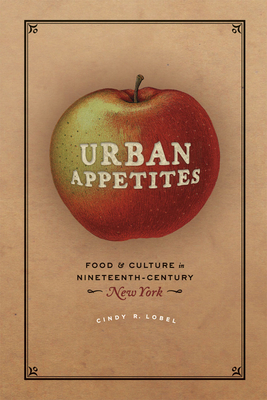 Glossy magazines write about them, celebrities give their names to them, and you’d better believe there’s an app (or ten) committed to finding you the right one. They are New York City restaurants and food shops. And their journey to international notoriety is a captivating one. The now-booming food capital was once a small seaport city, home to a mere six municipal food markets that were stocked by farmers, fishermen, and hunters who lived in the area. By 1890, however, the city’s population had grown to more than one million, and residents could dine in thousands of restaurants with a greater abundance and variety of options than any other place in the United States.

Historians, sociologists, and foodies alike will devour the story of the origins of New York City’s food industry in Urban Appetites. Cindy R. Lobel focuses on the rise of New York as both a metropolis and a food capital, opening a new window onto the intersection of the cultural, social, political, and economic transformations of the nineteenth century. She offers wonderfully detailed accounts of public markets and private food shops; basement restaurants and immigrant diners serving favorites from the old country; cake and coffee shops; and high-end, French-inspired eating houses made for being seen in society as much as for dining.  But as the food and the population became increasingly cosmopolitan, corruption, contamination, and undeniably inequitable conditions escalated. Urban Appetites serves up a complete picture of the evolution of the city, its politics, and its foodways.
Cindy R. Lobel is assistant professor of history at Lehman College.

“[O]ne snapshot of New York in a century that brought enormous changes in eating and food production…. Through the lens of food, the book surveys changes in the culture, demographics and politics of the city.”
— New York Times

“Lobel uncovers the 19th-century roots of New York City’s claim to be the food capital of the world and its implications of diversity, abundance, and exoticism associated with the rising urban US. . . . The book's best sections cover the growing cultural expectations of urban restaurants in the rise of public culture that serviced specialized clienteles. Recommended.”
— Choice

“Lobel’s fine book leads us on a fascinating tour of New York’s foodways past, letting us explore the farms and markets that supplied kitchens in the city’s homes and restaurants and introducing us to men and women who raised food, sold it, cooked it, and ate it.”
— Ann Fabian, author of The Skull Collectors: Race, Science, and America’s Unburied Dead

“Lobel's accessible cultural history takes us on a fascinating behind-the-scenes tour of New York's food system, covering everything from the provisioning of family kitchens to the emergence of the greatest restaurant scene in the world. Scholars and policymakers have recently recognized that food systems are a key to cultural and environmental sustainability, making this is an ideal time for Lobel's much-needed primer on the historic context for this essential human question. This is a must-read for all who hunger for a better understanding of how cities really work.”
— Owen Gutfreund

"New York's roots as the world's greatest culinary center are firmly cemented in Cindy Lobel's wonderful survey of the dazzling dining options of the nineteenth century. Her descriptions of markets, dining rooms, restaurants, and kitchens tell us not only what people ate but where they dined and how the city's rich ethnic diversity influenced it all."
— Lisa Keller

“A compelling story. . . . Lobel has written an engaging book about a fascinating subject, and it deserves to be widely read by food historians, New Yorkers, and anyone with an interest in how urban culture has historically shaped food distribution networks.”
— Journal of the Early Republic