The Sensory Order and Other Writings on the Foundations of Theoretical Psychology (The Collected Works of F. A. Hayek #14) (Hardcover) 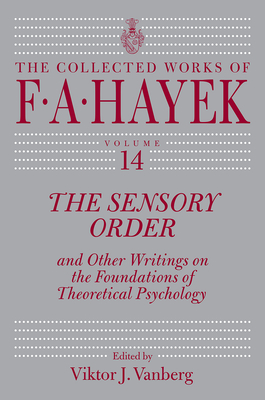 The Sensory Order and Other Writings on the Foundations of Theoretical Psychology (The Collected Works of F. A. Hayek #14) (Hardcover)


Other Books in Series

This is book number 14 in the The Collected Works of F. A. Hayek series.

F. A. Hayek (1899–1992) was one of the leading voices in economic and social theory, but he also wrote on theoretical psychology, including in the landmark book The Sensory Order. Although The Sensory Order was not widely engaged with by either psychologists or social scientists at the time of publication, it is seen today as essential for fully understanding Hayek’s more well-known work.

The latest addition to the University of Chicago Press’s Collected Works of F. A. Hayek series, The Sensory Order and Other Writings on the Foundations of Theoretical Psychology pairs the book, originally published in 1952, with additional essays related to The Sensory Order’s key themes, including a student paper from 1920 in which Hayek outlined the basic ideas he fully developed in the 1952 book. Rounding out the volume is an insightful introduction by editor Viktor Vanberg that sketches out the central problems Hayek was grappling with when he wrote The Sensory Order and the influential role this early thinking on theoretical psychology would play over the next six decades of his career. The book also features ample footnotes and citations for further reading, making this an essential contribution to the series.

F. A. Hayek (1899–1992), recipient of the Presidential Medal of Freedom in 1991 and cowinner of the Nobel Memorial Prize in Economics in 1974, was a pioneer in monetary theory and a leading proponent of classical liberalism in the twentieth century. Viktor Vanberg is professor emeritus of Freiburg University and a senior research fellow of the Walter Eucken Institut in Freiburg.