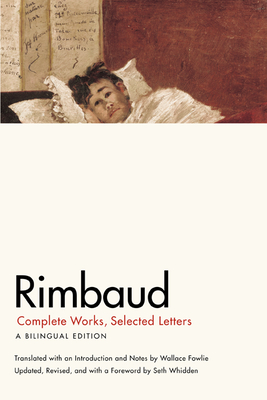 
Usually Ships in 1-5 Days
The enfant terrible of French letters, Jean-Nicholas-Arthur Rimbaud (1854-91) was a defiant and precocious youth who wrote some of the most remarkable prose and poetry of the nineteenth century, all before leaving the world of verse by the age of twenty-one. More than a century after his death, the young rebel-poet continues to appeal to modern readers as much for his turbulent life as for his poetry; his stormy affair with fellow poet Paul Verlaine and his nomadic adventures in eastern Africa are as iconic as his hallucinatory poems and symbolist prose.

The first translation of the poet's complete works when it was published in 1966, Rimbaud: Complete Works, Selected Letters introduced a new generation of Americans to the alienated genius—among them the Doors's lead singer Jim Morrison, who wrote to translator Wallace Fowlie to thank him for rendering the poems accessible to those who "don't read French that easily." Forty years later, the book remains the only side-by-side bilingual edition of Rimbaud's complete poetic works.

Thoroughly revising Fowlie's edition, Seth Whidden has made changes on virtually every page, correcting errors, reordering poems, adding previously omitted versions of poems and some letters, and updating the text to reflect current scholarship; left in place are Fowlie's literal and respectful translations of Rimbaud's complex and nontraditional verse. Whidden also provides a foreword that considers the heritage of Fowlie's edition and adds a bibliography that acknowledges relevant books that have appeared since the original publication. On its fortieth anniversary, Rimbaud remains the most authoritative—and now, completely up-to-date—edition of the young master's entire poetic ouvre.
Wallace Fowlie (1908-98) was the James B. Duke Professor of French Literature at Duke University. He was the author or translator of thirty books, including Rimbaud: A Critical Study and Rimbaud and Jim Morrison: The Rebel as Poet. Seth Whidden is assistant professor of French at Villanova University and coeditor-in-chief of Parade sauvage, the scholarly journal of Rimbaud studies.