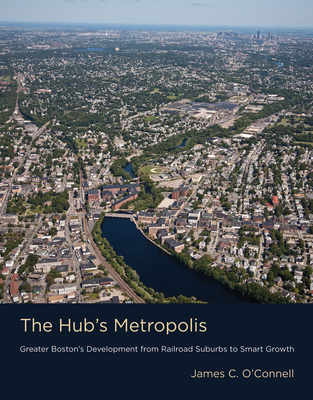 Out of Print - unavailable
The evolution of the Boston metropolitan area, from country villages and streetcar suburbs to exurban sprawl and “smart growth.”

Boston's metropolitan landscape has been two hundred years in the making. From its proto-suburban village centers of 1800 to its far-flung, automobile-centric exurbs of today, Boston has been a national pacesetter for suburbanization. In The Hub's Metropolis, James O'Connell charts the evolution of Boston's suburban development.

The city of Boston is compact and consolidated—famously, “the Hub.” Greater Boston, however, stretches over 1,736 square miles and ranks as the world's sixth largest metropolitan area. Boston suburbs began to develop after 1820, when wealthy city dwellers built country estates that were just a short carriage ride away from their homes in the city. Then, as transportation became more efficient and affordable, the map of the suburbs expanded. The Metropolitan Park Commission's park-and-parkway system, developed in the 1890s, created a template for suburbanization that represents the country's first example of regional planning.

O'Connell reminds us that these nine layers of suburban infrastructure are still woven into the fabric of the metropolis. Each chapter suggests sites to visit, from Waltham country estates to Cambridge triple-deckers.

James C. O'Connell is a Planner at the National Park Service, Northeast Region, in Boston. He is the author of Becoming Cape Cod: Creating a Seaside Resort.
The Hub's Metropolis is a well-crafted and engagingly written and illustrated case study that could serve as a superb model for similar efforts around the country and the world.—Journal of Regional Science—