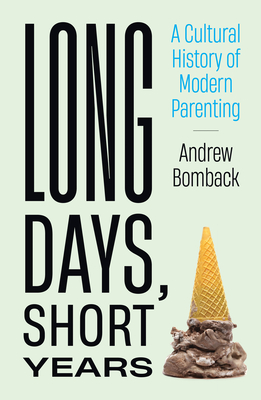 
Coming Soon - Available for Pre-Order Now
How parenting became a verb, from Dr. Spock and June Cleaver to baby whispering and free-range kids.

When did “parenting” become a verb? Why is it so hard to parent, and so rife with the possibility of failure? Sitcom families of the past—the Cleavers, the Bradys, the Conners—didn’t seem to lose any sleep about their parenting methods. Today, parents are likely to be up late, doomscrolling on parenting websites. In Long Days, Short Years, Andrew Bomback—physician, writer, and father of three young children—looks at why it can be so much fun to be a parent but, at the same time, so frustrating and difficult to parent. It’s not a “how to” book (although Bomback has read plenty of these) but a “how come” book, investigating the emergence of an immersive, all-in approach to raising children that has made parenting a competitive (and often not very enjoyable) sport.

Drawing on parenting books, mommy blogs, and historical accounts of parental duties as well as novels, films, podcasts, television shows, and his own experiences as a parent, Bomback charts the cultural history of parenting as a skill to be mastered, from the laid-back Dr. Spock’s 1950s childcare bible—in some years outsold only by the actual Bible—to the more rigid training schedules of Babywise. Along the way, he considers the high costs of commercialized parenting (from the babymoon on), the pressure on mothers to have it all (and do it all), scripted parenting as laid out in How to Talk So Kids Will Listen, parenting during a pandemic, and much more.
Andrew Bomback is Associate Professor of Medicine at Columbia University Irving Medical Center and the author of Doctor. His essays have appeared in the Atlantic, Los Angeles Review of Books, McSweeney’s, and elsewhere.

"Bomback’s work on modern parenthood takes on many prevalent topics, including economic anxiety, social pressures, and the tension between careers and family life. His narrative also reveals the internal pressures that parents face to become the best they can be in that role, while recognizing the limits of their resources, patience, and personalities…His empathy and frankness shine through on each page. This book is enjoyable to read and likely to be validating for many parents of young children.”
—Library Journal