Frankenstein: Annotated for Scientists, Engineers, and Creators of All Kinds (Paperback) 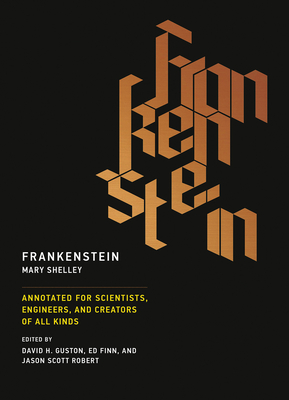 Frankenstein: Annotated for Scientists, Engineers, and Creators of All Kinds (Paperback)


Usually Ships in 1-5 Days
The original 1818 text of Mary Shelley's classic novel, with annotations and essays highlighting its scientific, ethical, and cautionary aspects.

Mary Shelley's Frankenstein has endured in the popular imagination for two hundred years. Begun as a ghost story by an intellectually and socially precocious eighteen-year-old author during a cold and rainy summer on the shores of Lake Geneva, the dramatic tale of Victor Frankenstein and his stitched-together creature can be read as the ultimate parable of scientific hubris. Victor, “the modern Prometheus,” tried to do what he perhaps should have left to Nature: create life. Although the novel is most often discussed in literary-historical terms—as a seminal example of romanticism or as a groundbreaking early work of science fiction—Mary Shelley was keenly aware of contemporary scientific developments and incorporated them into her story. In our era of synthetic biology, artificial intelligence, robotics, and climate engineering, this edition of Frankenstein will resonate forcefully for readers with a background or interest in science and engineering, and anyone intrigued by the fundamental questions of creativity and responsibility.

This edition of Frankenstein pairs the original 1818 version of the manuscript—meticulously line-edited and amended by Charles E. Robinson, one of the world's preeminent authorities on the text—with annotations and essays by leading scholars exploring the social and ethical aspects of scientific creativity raised by this remarkable story. The result is a unique and accessible edition of one of the most thought-provoking and influential novels ever written.

David Guston is Professor and Founding Director of the School for the Future of Innovation in Society at Arizona State University, where he also serves as Codirector of the Consortium for Science, Policy, and Outcomes..

Ed Finn is Founding Director of the Center for Science and the Imagination at Arizona State University, where he is also Assistant Professor with a joint appointment in the School of Arts, Media, and Engineering and the Department of English.

Jason Scott Robert is Lincoln Chair in Ethics, Associate Professor in the School of Life Sciences, and Director of the Lincoln Center for Applied Ethics at Arizona State University.

Jane Maienschein is Regents' Professor and Parents Association Professor in the School of Life Sciences and Director of the Center of Biology and Society at Arizona State University.

Alfred Nordmann is Professor of Philosophy at Technische Universität Darmstadt and Adjunct Professor of Philosophy at the University of South Carolina.
[The editors's] expertise speaks to Frankenstein's enduring message about existential stakes — and the potentially alarming societal consequences likely to devolve from the unfettered march of science and technology. Concerns about unintended consequences were urgent at the onset of the Industrial Revolution and the Nuclear Age, and they are, if anything, more urgent now.—Los Angeles Review of Books—

The critical essays accompanying the text are eclectic, cross-disciplinary, and incisive....authoritative, yet accessible, and firmly situates both Shelley and her novel in relation to our contemporary tech-oriented age.

This newly annotated edition of the classic wrests the text from English majors and hands it to STEMers, but also brings the concerns of literature—moral weight, literary device, creativity—to readers at risk of underestimating their importance.