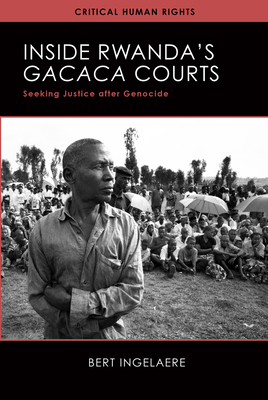 After the 1994 genocide in Rwanda, victims, perpetrators, and the country as a whole struggled to deal with the legacy of the mass violence. The government responded by creating a new version of a traditional grassroots justice system called gacaca. Bert Ingelaere, based on his observation of two thousand gacaca trials, offers a comprehensive assessment of what these courts set out to do, how they worked, what they achieved, what they did not achieve, and how they affected Rwandan society.

Weaving together vivid firsthand recollections, interviews, and trial testimony with systematic analysis, Ingelaere documents how the gacaca shifted over time from confession to accusation, from restoration to retribution. He precisely articulates the importance of popular conceptions of what is true and just. Marked by methodological sophistication, extraordinary evidence, and deep knowledge of Rwanda, this is an authoritative, nuanced, and bittersweet account of one of the most important experiments in transitional justice after mass violence.

Bert Ingelaere is a postdoctoral research fellow at the Research Foundation–Flanders (FWO) in Belgium. He is the coeditor of Genocide, Risk and Resilience: An Interdisciplinary Approach.
"This masterful study provides a balanced, nuanced assessment of Rwanda's local courts, showing how diverse social dynamics influenced both the operations of gacaca and its outcomes in different local communities. Essential reading for anyone interested in transitional justice and conflict resolution, in Rwanda and beyond."—Catharine Newbury, Smith College —Catherine Newbury,Smith College

"This is that rare book that systematically examines how ordinary people respond to the transitional justice enacted in their name. Bert Ingelaere's multisited and multimethod ethnography is a model for how to get at local understandings of grassroots mechanisms. His findings suggest cautionary lessons for anyone interested in making postconflict justice and reconciliation more community-based." —Lars Waldorf,University of York

"Rigorous and reliable. It has much to say about the difficulties of reconciliation politics."
—Choice