Last Train to Auschwitz: The French National Railways and the Journey to Accountability (Paperback) 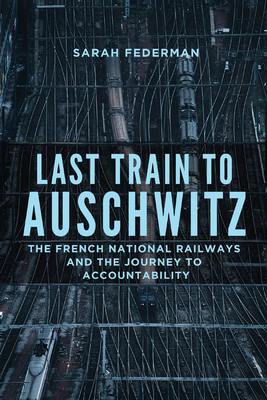 Last Train to Auschwitz: The French National Railways and the Journey to Accountability (Paperback)

In the immediate decades after World War II, the French National Railways (SNCF) was celebrated for its acts of wartime heroism. However, recent debates and litigation have revealed the ways the SNCF worked as an accomplice to the Third Reich and was actively complicit in the deportation of 75,000 Jews and other civilians to death camps. Sarah Federman delves into the interconnected roles—perpetrator, victim, and hero—the company took on during the harrowing years of the Holocaust.

Grounded in history and case law, Last Train to Auschwitz traces the SNCF’s journey toward accountability in France and the United States, culminating in a multimillion-dollar settlement paid by the French government on behalf of the railways.The poignant and informative testimonies of survivors illuminate the long-term effects of the railroad’s impact on individuals, leading the company to make overdue amends. In a time when corporations are increasingly granted the same rights as people, Federman’s detailed account demonstrates the obligations businesses have to atone for aiding and abetting governments in committing atrocities. This volume highlights the necessity of corporate integrity and will be essential reading for those called to engage in the difficult work of responding to past harms.

Sarah Federman is an assistant professor of negotiation and conflict management at the University of Baltimore.

“An excellent, well-written, original contribution to a growing field of business and human rights. Last Train to Auschwitz engagingly weaves together victims’ narratives and historical and legal archives to provide a compelling contribution to the study of corporate accountability and transitional justice.”—Leigh Payne, University of Oxford

“A pathbreaking book on Holocaust memory. Setting the SNCF struggle with its past into a transatlantic exchange, Federman has written an integrated history of an unfinished controversy that has already lasted more than thirty years. An important work for understanding the role of businesses in transitional justice.”—Jean-Marc Dreyfus, University of Manchester

“The author’s analysis admirably combines scholarly scrupulousness with moral insight as she documents the personal stories of some who survived the Holocaust and others who did not. A rare book that ably combines historical edification with a moving narrative.”—Kirkus Reviews

“Thank you for this remarkable book...I don't think I fully appreciated the implications of repair for serious trauma involving institutions until reading your account. You are to be thanked greatly for this! A real triumph!”—Arthur Kleinman, Harvard University

“Last Train to Auschwitz is one of the best books I’ve read on transitional justice, accountability, and the figure of the victim after periods of mass violence. The research is original, the organization of the book is clear, and the writing is elegant and engaging.”—Ronen Steinberg, Department of History, Michigan State University

"Exhaustively researched and fluidly written, the book takes a hard look at these varying roles the SNCF played during the conflict."—The San Diego Union-Tribune