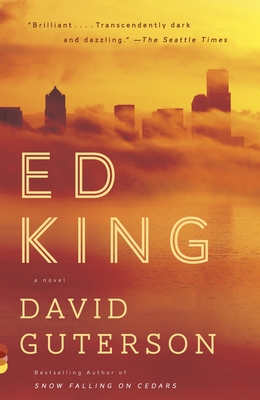 “A rollicking modern-day version of the classic tragedy Oedipus Rex, this wickedly funny story will leave you in stitches. It has the cynicism of Tom Wolfe mixed with the absurdity of Carl Hiassen. The novel begins with a slow and dangerous seduction, and then picks up speed as each new character is introduced. Guterson fearlessly takes on contemporary societal themes as his novel builds to a thrill-ride climax. Highly recommended!”
— Jane, Eagle Harbor Book Company, Bainbridge Island, WA

A rollicking modern-day interpretation of the classic Greek tragedy, Oedipus Rex, this story will leave you in stitches. It has the cynicism of Tom Wolfe mixed with the absurdity of Carl Hiassen.  The novel begins with a slow dangerous seduction then picks up speed as each new character and plot twist is introduced. This story is wickedly funny, fearlessly taking on many contemporary societal themes as it builds to a thrill-ride climax of an ending.   Featured in the story is a cadre of rather despicable but entertaining characters who are caricatures of the 1980’s “Me Generation.”  The writing is superb and the story is fantastic.  I recommend it to everyone!

— From Jane
From the award-winning, bestselling author of Snow Falling on Cedars comes a modern re-imagining of one of the world’s greatest tragedies, Sophocles’ Oedipus Rex—a story of destiny, desire, and destruction. • “Brilliant.... Transcendently dark and dazzling.” —The Seattle Times

In Seattle of 1962, Walter Cousins, a mild-mannered actuary takes a risk of his own and makes the biggest error of his life: He sleeps with Diane Burroughs, the sexy, not-quite-legal British au pair who’s taking care of his children for the summer. When Diane becomes pregnant and leaves their baby on a doorstep, it sets in motion a tragedy of epic proportions. The orphaned child, adopted by an adoring family and named Edward Aaron King, grows up to become a billionaire Internet tycoon and an international celebrity—the “King of Search”—who unknowingly, but inexorably, hurtles through life toward a fate he may have no way of reversing.
David Guterson is the author of the novels East of the Mountains, The Other, Our Lady of the Forest, and Snow Falling on Cedars, which won the PEN/Faulkner Award, as well as a story collection, The Country Ahead of Us, the Country Behind, and Family Matters: Why Homeschooling Makes Sense. He lives in Washington State.
A Seattle Times Best Book of the Year

“The ranks of dependably original novelists, who create radically new worlds again and again, then delight in tricking them up, are thin, but would certainly include Mitchell, Nicholson Baker, Thomas Pynchon, Jennifer Egan, Colson Whitehead and Jonathan Lethem. . . . This is the club where high concept is born—and with the publication of David Guterson’s Ed King it has a surprising new member.” —The New York Times

“Guterson succeeds in recasting one of literature’s most haunted and vaunted tales as a plausible page-turner. . . . Compelling.” —USA Today

“Old stories survived millennia because they tell us about the human condition. Brave writers like Guterson can renew them.” —The Oregonian

“Daring. . . . Guterson keeps [Ed King] winningly good-natured and almost farcical, all the better to teach timeless lessons about hubris, ambition, and the consequences of long-ago sins.” —O, The Oprah Magazine

“Guterson takes the reader through a rollicking half-century of American hubris and gluttony.” —The New York Times

“A tragic and darkly funny modern myth in an omnipotent, wry voice reminiscent of Philip Roth. . . . The Greeks weren’t afraid to take on God, and neither is Guterson. . . . A master storyteller.” —Bookreporter.com

“Guterson has managed to infuse this novel with feelings of freshness, relevance and even believability that are sure to delight 21st-century readers. A special pleasure will be experienced by those who can appreciate how the old elements have been modernized. Oedipus may not have been Guterson’s to begin with, but by the end, readers will have no doubts that Ed King is a creation entirely his own.” —BookPage

“A great story and a riveting read.” —The Daily Mail (London)

“David Guterson . . . retells one of the oldest stories we know in a way that makes you hang on every twist and turn. . . . A largely entertaining book that should add to Guterson’s already glittering reputation.” —The Free Lance-Star (Fredericksburg, VA)

“[Ed King] has original characters, a race to discover the truth as gripping as the denouement of Daphne Du Maurier’s Rebecca, and some insights into human relationships so sharp that they make a reader cringe.” —The New York Journal of Books