To Catch a Mermaid (Paperback) 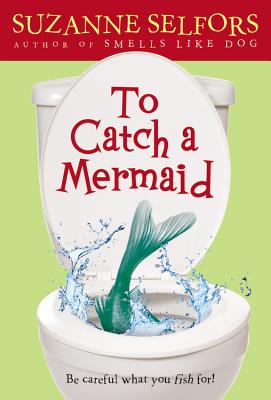 To Catch a Mermaid (Paperback)


Usually Ships in 1-5 Days
Boom Broom doesn't think his life could get any worse. Ever since his mother was swept away by a twister, his family has gone crazy. They refuse to leave the house and Halvor, the Viking descendant who rents the room over their garage, will only cook fish for Boom and his sister Mertyle to eat.

When Boom finds a baby mermaid who seems to grant unlimited wishes, he thinks his luck has turned around. That is, until his sister is hit by the curse of the merfolk and starts to turn green. Now Boom and his best friend Winger must find a way to return the foul-tempered merbaby to its mother and save Mertyle before it is too late.
Suzanne Selfors is a national best selling author of the Ever After High School Stories series, the Imaginary Veterinary series, the Smells Like Dog series, and many other books. She's earned five Junior Library Guild Awards and a WA State Book Award. She's been a Kid's Indie Pick, a Scholastic Book Fair bestseller, and been included in Bank Street's 100th Edition of Best Children's Books, Smithsonian Magazine's Notable Children's Books, and Amazon's Best Children's Books.

She lives on an island in the Pacific Northwest where rain falls like music and horses are beloved.
"The magic is wonderfully, classically unpredictable...the giggles are plentiful....Readers will commiserate, chuckle and cheer as Boom navigates his own series of unfortunate events."—The Bulletin of the Center for Children's Books

"This amusing story has lots of kid appeal. Selfors has conjured up great characters and settings, and her narrative voice never falters...sure to be a hit with any reader searching for something funny."—School Library Journal

"Reminiscent of Dahl, Ibbotson and Snicket."—Kirkus