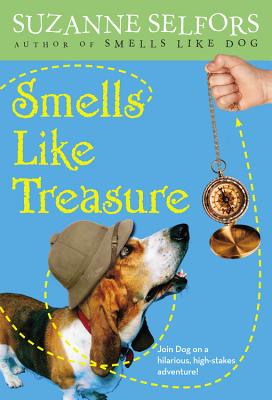 This is book number 2 in the Smells Like Dog series.

Homer Pudding and his treasure-sniffing best friend, Dog, are about to go on an all-new adventure! When Homer receives a mysterious note emblazoned with the letters L.O.S.T., he knows the moment he has been waiting for has finally arrived. It is time to meet the Society of Legends, Objects, Secrets, and Treasures and become a true adventurer.
With Dog at his side, everything seems to be going as planned...until an unexpected opponent challenges Homer's spot. They are tasked with a dangerous quest, and only the one who solves the clues and reaches the treasure first will be given membership. Their hunt for treasure takes them on an unforgettable journey full of hazards, mysteries, and surprises!
Suzanne Selfors is a national best selling author of the Ever After High School Stories series, the Imaginary Veterinary series, the Smells Like Dog series, and many other books. She's earned five Junior Library Guild Awards and a WA State Book Award. She's been a Kid's Indie Pick, a Scholastic Book Fair bestseller, and been included in Bank Street's 100th Edition of Best Children's Books, Smithsonian Magazine's Notable Children's Books, and Amazon's Best Children's Books.

She lives on an island in the Pacific Northwest where rain falls like music and horses are beloved.
* "A funny, suspenseful adventure that stretches the borders of readers' imaginations. A heartwarming and quirky cast of characters adds to the fun...Homer and Dog are a strange, silly, and lovable duo."—School Library Journal, starred review

"[Filled with] quirky side characters and over-the-top humor."—Booklist