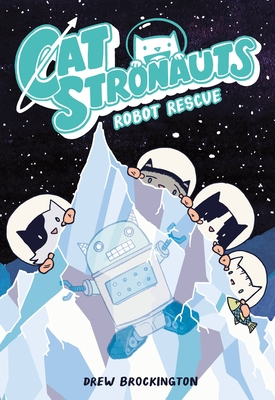 By Drew Brockington (By (artist))

This is book number 4 in the CatStronauts series.

Cat-Stro-Bot has been with the CatStronauts through it all. But now he's stranded on Jupiter's coldest moon after a mission gone wrong--and his best friend/creator Blanket isn't about to leave him behind. When CATSUP refuses Blanket's rescue mission request, he creates robo-stand-ins for the team so they can sneak off into space. Soon, the rest of the CatStronauts, Major Meowser, Pom Pom and Waffles, are off on their longest journey ever with experimental new technology. The robot rescue is afoot! In this full-color graphic novel, author/illustrator Drew Brockington takes the CatStronauts to new heights, adding in mounds of robot glitches, wonky cover-ups, and fish jokes by the ton!
Drew Brockington has flown a Space Shuttle, repaired the International Space Station, and served in Mission Control; all during a week at Space Camp. CatStronauts is his first series. He lives with his family in Minneapolis.
Praise for CatStronauts: An Amazon Best Book for April 2017"With its appealing blend of cuteness, substance, and humor, this should have readers over the moon. "—Kirkus Reviews

"The engagingly lighthearted drama and positive resolutions, and the expressive characters, who are as adorable as they are adventurous, provide... fun purchases that will do well on their own or paired with heavier nonfiction titles on history or the environment."
—School Library Journal

"Humor and suspense compete throughout... In playful, mock-heroic, full-color cartoons, Brockington mines space theater for everything.... Even the chapter headings get in on the fun."—Publishers Weekly

"There's lots of enthusiasm for graphic novels for this age range, and the CatStronauts deserve a spot."—BCCB