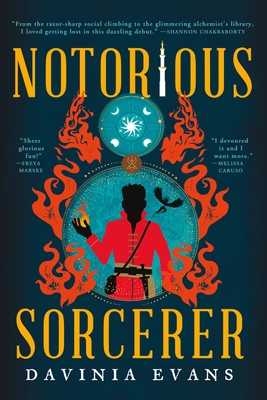 In a city filled with dangerous yet heavily regulated alchemical magic, a man from the slums discovers he may be its only hope to survive certain destruction in this wickedly entertaining fantasy.

Welcome to Bezim, where sword-slinging bravi race through the night and rich and idle alchemists make magic out of mixing and measuring the four planes of reality.

Siyon Velo, Dockside brat turned petty alchemist, scrapes a living hopping between the planes to harvest ingredients for the city’s alchemists. But when Siyon accidentally commits an act of impossible magic, he’s catapulted into the limelight—which is a bad place to be when the planes start lurching out of alignment, threatening to send Bezim into the sea.

It will take a miracle to save the city. Good thing Siyon has pulled off the impossible before. Now he just has to master it.

"From the razor-sharp social climbing to the glimmering alchemist's library to the hidden realms beneath it all, I loved getting lost in this dazzling debut." —Shannon Chakraborty

Davinia Evans was born in the tropics and raised on British comedy. With a lifelong fantasy-reading habit and an honours thesis in political strategy, it was perhaps inevitable that she turn to a life of crafting stories full of sneaky ratbags tangling with magic. She lives in Melbourne, Australia, with two humans (one large and one small), a neurotic cat, and a cellar full of craft beer. Dee talks more about all of that on Twitter as @cupiscent

"Very rarely do I read a fantasy city so wondrously realized as Bezim. From the razor-sharp social climbing to the glimmering alchemist's library to the hidden realms beneath it all, I loved getting lost in this dazzling debut." —Shannon Chakraborty, author of The City of Brass

"A delightful and fast-paced ride full of flashy swordplay, high society, and thrilling magic. Reading Notorious Sorcerer made me feel like I was ten years old again and discovering adventure fantasy for the first time. Sheer, glorious fun!"—Freya Marske, author of A Marvellous Light

"A brilliant alchemical recipe! Notorious Sorcerer is a delicious melange of my favourite things, remixing historical magic with class consciousness. I couldn't put it down."—Olivia Atwater, author of Half A Soul

"Notorious Sorcerer has everything I want in a fantasy novel: a picaresque hero to make my heart sing, a refreshingly new kind of magic, and a waggish sense of humor. If you like a healthy dollop of rollicking fun with your epic fantasy, this is the book for you."—Megan Bannen, author of The Undertaking of Hart and Mercy

"Notorious Sorcerer is a real delight, with compelling characters and wonderful worldbuilding that sucks the reader in and keeps them engaged from beginning to end."—Mike Brooks, author of The Black Coast

“Notorious Sorcerer is a firework of a fantasy novel: vibrant, explosive, deliciously dangerous, and impossibly fun. A must-read debut.”—Tasha Suri, author of The Jasmine Throne

"[An] energetic epic fantasy debut...the witty prose, endearing characters, and sense of playful whimsy throughout keep the pages turning. This is a charmer." —Publishers Weekly

"Intricate and fascinating — I would eagerly read more tales of the city of Bezim."—Marie Brennan, author of The Memoirs of Lady Trent series

"Evans’s debut is a high fantasy full of excellent worldbuilding, with an enjoyable magic system and strong characters."—Library Journal

"A whimsical tale...Set in an expansive magical world that crosses multiple planes of existence, Notorious Sorcerer doesn’t get bogged down in heavy exposition or take itself too seriously, instead trusting its readers to both keep up with its fast-paced story and laugh while they do it."—Paste Magazine