The Girls in the Wild Fig Tree: How I Fought to Save Myself, My Sister, and Thousands of Girls Worldwide (Paperback) 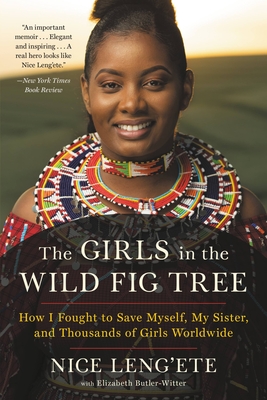 The Girls in the Wild Fig Tree: How I Fought to Save Myself, My Sister, and Thousands of Girls Worldwide (Paperback)

An "elegant and inspiring memoir" by the human rights activist who changed the minds of her elders, reformed traditions from the inside, and is creating a better future for girls and women throughout Africa (Sonia Faleiro, New York Times).

Nice Leng`ete was raised in a Maasai village in Kenya. In 1998, when Nice was six, her parents fell sick and died, and Nice and her sister Soila were taken in by their father’s brother, who had little interest in the girls beyond what their dowries might fetch. Fearing “the cut” (female genital mutilation, a painful and sometimes deadly ritualistic surgery), which was the fate of all Maasai women, Nice and Soila climbed a tree to hide.

Nice hoped to find a way to avoid the cut forever, but Soila understood it would be impossible. But maybe if one of the sisters submitted, the other would be spared. After Soila chose to undergo the surgery, sacrificing herself to save Nice, their lives diverged. Soila married, dropped out of school, and had children–all in her teenage years–while Nice postponed receiving the cut, continued her education, and became the first in her family to attend college.

Supported by Amref, Nice used visits home to set an example for what an uncut Maasai woman can achieve. Other women listened, and the elders finally saw the value of intact, educated girls as the way of the future. The village has since ended FGM entirely, and Nice continues the fight to end FGM throughout Africa, and the world.

Nice’s journey from “heartbroken child and community outcast, to leader of the Maasai” is an inspiration and a reminder that one person can change the world–and every girl is worth saving.

Kenyan human rights activist Nice Leng’ete is from Kimana, Kenya.  When she was eight years old, she defied cultural convention and fled from female genital cutting. Nice managed to become the first woman in Masai history to be bestowed with the Black Talking Stick, known as “esiere.”  The stick is a symbol of leadership and allows Nice to engage in conversations with men and the elders, a right usually denied to Masai girls.

Nice advocates to end female genital mutilation and replace it with alternative rites of passage. Through her work with Amref Health Africa, she has helped save an estimated 15,000 girls from the cut and forced childhood marriages.

Nice created Nice Place Foundation, a leadership training academy and rescue centre. The Foundation is a sanctuary for girls at risk for circumcision and early marriage, a place for them to realize their full potential.
“A real hero looks like Nice Leng’ete, the Kenyan anti-female-genital-mutilation activist whose response to her childhood was to improve the experience for others...elegant and inspiring memoir.”—Sonia Faleiro, New York Times

"An inspirational memoir from a human rights activist who has devoted her life to fighting female genital mutilation. The author is a member of the Maasai tribe, born in the small Kenyan town of Kimana, and she evocatively explores the culture of her people. . . . With urgent, shocking, and heartbreaking detail, Leng’ete brings readers into her life. An incredibly powerful story that offers real hope for the future."—Kirkus Reviews (starred)