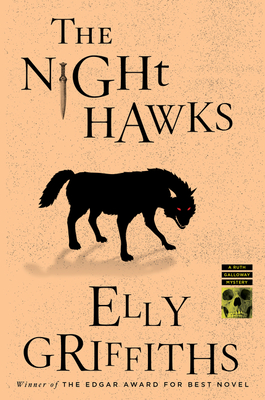 This is book number 13 in the Ruth Galloway Mysteries series.

There’s nothing Ruth Galloway hates more than amateur archaeologists, but when a group of them stumble upon Bronze Age artifacts alongside a dead body, she finds herself thrust into their midst—and into the crosshairs of a string of murders circling ever closer.

Ruth is back as head of archaeology at the University of North Norfolk when a group of local metal detectorists—the so-called Night Hawks—uncovers Bronze Age artifacts on the beach, alongside a recently deceased body, just washed ashore. Not long after, the same detectorists uncover a murder-suicide—a scientist and his wife found at their farmhouse, long thought to be haunted by the Black Shuck, a humongous black dog and a harbinger of death. The further DCI Nelson probes into both cases, the more intertwined they become, and the closer they circle to David Brown, the new lecturer Ruth has recently hired, who seems always to turn up wherever Ruth goes.

ELLY GRIFFITHS is the author of the Ruth Galloway and Brighton mystery series, as well as the standalone novels The Stranger Diaries, winner of the Edgar Award for Best Novel, and The Postscript Murders. She is the recipient of the CWA Dagger in the Library Award and the Mary Higgins Clark Award. She lives in Brighton, England.

USA Today Bestseller   "This thirteenth time out for these characters brings a dramatic ending that leaves Ruth and Nelson’s relationship even more complicated. Not to be missed by fans of two UK television series, Detectorists and Time Team, the latter of which is nothing short of a British institution." —Booklist  PRAISE FOR ELLY GRIFFITHS AND THE RUTH GALLOWAY SERIES   ​Winner of the Edgar Award for Best Novel  Winner of the Mary Higgins Clark Award  Winner of the CWA Dagger in the Library Award   "Galloway is an everywoman, smart, successful and a little bit unsure of herself. Readers will look forward to learning more about her." —USA Today   "Elly Griffiths draws us all the way back to prehistoric times…Highly atmospheric." —The New York Times Book Review   "Forensic archeologist and academic Ruth Galloway is a captivating amateur sleuth-an inspired creation. I identified with her insecurities and struggles, and cheered her on. " —Louise Penny, author of the bestselling Armand Gamache series   "These books are must-reads." —Deborah Crombie, author of the Duncan Kincaid/Gemma James series   "[Ruth Galloway's] an uncommon, down-to-earth heroine whose acute insight, wry humor, and depth of feeling make her a thoroughly engaging companion." —Erin Hart, Agatha and Anthony Award nominated author of Haunted Ground and Lake of Sorrows   "Ruth Galloway is a remarkable, delightful character…A must-read for fans of crime and mystery fiction." —Associated Press   "Rich in atmosphere and history and blessed by [Griffith's] continuing development of brilliant, feisty, independent Ruth...A Room Full of Bones, like its predecessors, works its magic on the reader's imagination." —Richmond Times-Dispatch   "Lovers of well-written and intelligent traditional mysteries will welcome [Griffith's] fourth book…A Room Full of Bones is a clever blend of history and mystery with more than enough forensic details to attract the more attentive reader." —Denver Post —