The Property-Owning Democracy: Freedom and Capitalism in the Twenty-First Century (Routledge Studies in Social and Political Thought) (Paperback) 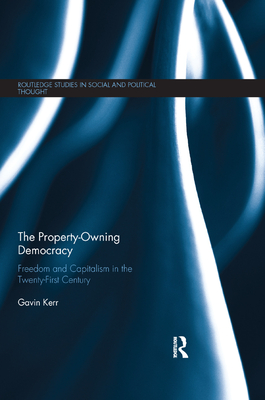 The Property-Owning Democracy: Freedom and Capitalism in the Twenty-First Century (Routledge Studies in Social and Political Thought) (Paperback)

The ideas of 'predistribution' and the property-owning democracy have recently emerged as the central features of the progressive social liberal response to the problems of poverty, unemployment, economic insecurity, burgeoning socio-economic inequality, and economic instability, none of which the more familiar institutions of welfare state capitalism seem able effectively to solve. These social liberal proposals for institutional reform have, however, been rejected by 'neo-classical' liberals who have attempted to modernize and revitalize the traditional classical liberal case for a set of 'market democratic' laissez-faire institutions. This book makes a fresh attempt to demarcate an area of common ground between the positions occupied by classical and social liberals by identifying a set of institutional arrangements to which both can agree, while at the same time recognizing that there will be many important issues about which liberal (and non-liberal) political and social thinkers will continue strongly to disagree.

Drawing on ideas and arguments identifiable within a particular branch of the left-libertarian tradition, the book develops market democratic interpretations of the ideas of predistribution and the property-owning democracy, and presents a powerful case for an institutional reform which constitutes a genuinely progressive alternative to more familiar social democratic institutions. By identifying progressive predistributive institutions as essential conditions both for the effective protection of 'market freedom' and for the maximization of the substantive opportunities of the least advantaged members of society, the book shows how these institutions may be justified on grounds which both classical and social liberals may reasonably be expected to endorse.

Gavin Kerr is a researcher whose interests lie at the intersection of the fields of politics, philosophy, and economics. His work focuses in particular on the relationship between the classical and social liberal traditions, and on the ideas of market democracy and the property-owning democracy.