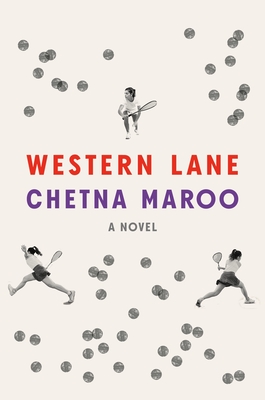 A taut, enthralling first novel about grief, sisterhood, and a young athlete's struggle to transcend herself.

Eleven-year-old Gopi has been playing squash since she was old enough to hold a racket. When her mother dies, her father enlists her in a quietly brutal training regimen, and the game becomes her world. Slowly, she grows apart from her sisters. Her life is reduced to the sport, guided by its rhythms: the serve, the volley, the drive, the shot and its echo.

But on the court, she is not alone. She is with her pa. She is with Ged, a thirteen-year-old boy with his own formidable talent. She is with the players who have come before her. She is in awe.

An indelible coming-of-age story, Chetna Maroo’s first novel captures the ordinary and annihilates it with beauty. Western Lane is a valentine to innocence, to the closeness of sisterhood, to the strange ways we come to know ourselves and each other.

Chetna Maroo lives in London. Her stories have been published in the Paris Review, the Stinging Fly and the Dublin Review and she was the recipient of the 2022 Plimpton Prize for Fiction.

“A poignant illustration of the power of sports to help a family deal with grief—and each other—as they gradually make their way out of the darkness . . . [Maroo] is a marvelous and restrained storyteller.”
—Shahina Piyarali, Shelf Awareness

“Maroo’s tale traverses the complexities of one family with an understated beauty, simultaneously graceful and teeming with fierceness, much like Gopi on the court. It is a powerful coming-of-age story, a tale of growing up as much as a tale of grief.”
—Abeje Schnake, Booklist

“Compact and powerful . . . This will invigorate readers.”
—Publisher’s Weekly

“Subtle and elegant . . . Gopi’s retrospective narration accumulates slow layers of heartbreak as the story proceeds, patiently building up an entire landscape of emotion through gestures, silences, and overheard murmurings in the dark. A debut novel of immense poise and promise.”
—Kirkus Reviews (starred review)

“Starting off as an intimate tone poem, this story of a squash-obsessed teenager expands into something with the amplitude, depth, and ringing power of a great symphony. In other words—WOW. Western Lane is glorious. You’ll want to read it over and over again.”
—Aravind Adiga, author of Amnesty

“Combining the precision and the efficiency of an athlete with the mysteries of childhood loss and memory, Western Lane is a novel in which we linger on every breathing line and relish every close observation. What an exceptionally talented writer Chetna Maroo is!”
—Yiyun Li, author of The Book of Goose