In the Devil's Snare: The Salem Witchcraft Crisis of 1692 (Paperback) 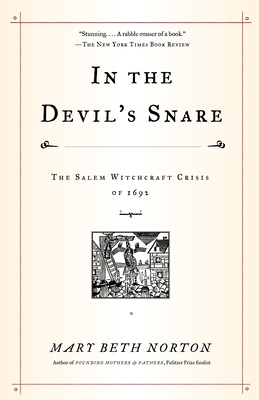 In the Devil's Snare: The Salem Witchcraft Crisis of 1692 (Paperback)

In 1692 the people of Massachusetts were living in fear, and not solely of satanic afflictions. Horrifyingly violent Indian attacks had all but emptied the northern frontier of settlers, and many traumatized refugees—including the main accusers of witches—had fled to communities like Salem. Meanwhile the colony’s leaders, defensive about their own failure to protect the frontier, pondered how God’s people could be suffering at the hands of savages. Struck by the similarities between what the refugees had witnessed and what the witchcraft “victims” described, many were quick to see a vast conspiracy of the Devil (in league with the French and the Indians) threatening New England on all sides. By providing this essential context to the famous events, and by casting her net well beyond the borders of Salem itself, Norton sheds new light on one of the most perplexing and fascinating periods in our history.
Mary Beth Norton is Mary Donlon Alger Professor of American History at Cornell University. She is the author of The British-Americans: The Loyalist Exiles in England, 1774—1789 (1972); Liberty’s Daughters: The Revolutionary Experience of American Women, 1750—1800 (1980); Founding Mothers & Fathers: Gendered Power and the Forming of American Society (1996), which was a Pulitzer Prize finalist; and (with five others) A People and a Nation (6th ed., 2001). She has also edited several works on women’s history and served as the general editor of The AHA Guide to Historical Literature (3rd ed., 1995).
“Stunning. . . . A rabble-rouser of a book.” –The New York Times Book Review

“Fresh and persuasively argued. . . . Norton builds her case with the precision of a criminal prosecutor. . . . Her conclusion is forceful.” –Boston Globe

“The freshest, and most detailed account . . . that we have had in a decade. . . . A landmark achievement. It may well herald a new golden age in American history.” –Los Angeles Times