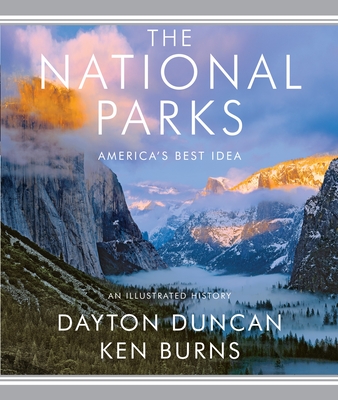 
Backordered
Based on a masterful PBS series from one of our most treasured filmmakers—a glorious, lavishly illustrated account of the adventures, mythmaking, and intense political battles that led to an essential expression of American democracy.

“Beautiful and erudite…[and] how Americans learned (or failed to learn) proper stewardship of nature.” —The Washington Post

America’s national parks spring from an idea as radical as the Declaration of Independence: that the nation’s most magnificent and sacred places should be preserved, not for royalty or the rich, but for everyone. In this evocative and lavishly illustrated narrative, Ken Burns and Dayton Duncan delve into the history of the park idea, from the first sighting by white men in 1851 of the valley that would become Yosemite and the creation of the world’s first national park at Yellowstone in 1872, through the most recent additions to a system that now encompasses nearly four hundred sites and 84 million acres.

The authors recount the evolution of the park system, and the enduring ideals that fostered its growth. They capture the importance and splendors of the individual parks: from Haleakala in Hawaii to Acadia in Maine, from Denali in Alaska to the Everglades in Florida, from Glacier in Montana to Big Bend in Texas. And they introduce us to a diverse cast of compelling characters—both unsung heroes and famous figures such as John Muir, Theodore Roosevelt, and Ansel Adams—who have been transformed by these special places and committed themselves to saving them from destruction so that the rest of us could be transformed as well.
DAYTON DUNCAN, writer and producer of The National Parks, is an award-winning author and documentary filmmaker. His nine other books include, with Ken Burns, Horatio’s Drive and Lewis & Clark. He has collaborated on all of Ken Burns’s films for twenty years as a writer, producer, and consultant. He lives in Walpole, New Hampshire.

KEN BURNS, director and producer of The National Parks, founded his own documentary company, Florentine Films, in 1976. His films include The War, Jazz, Baseball, and The Civil War, which was the highest-rated series in the history of American public television. His work has won numerous prizes, including the Emmy and Peabody Awards, and has received two Academy Award nominations. He received a Lifetime Achievement Emmy Award in 2008. He lives in Walpole, New Hampshire.
Praise for the PBS series:

“Stunning and restorative, like the parks themselves.” —The New York Times

“A masterful historic document, a vivid portrait of the land set against the stories of those who worked to acquire it and then protect it against those who still would dismantle or compromise it.” —New York Daily News

“Beautiful and erudite...Underneath its wonder, The National Parks is really about how Americans learned (or failed to learn) proper stewardship of nature.” —The Washington Post