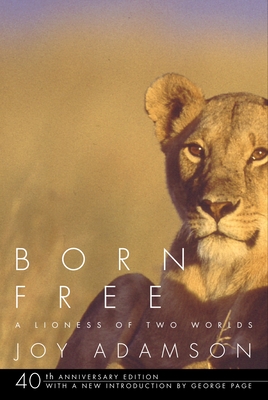 
Email or call for price
There have been many accounts of the return to the wild of tame animals, but since its original publication in 1960, when The New York Times hailed it as a “fascinating and remarkable book,” Born Free has stood alone in its power to move us.

Joy Adamson's story of a lion cub in transition between the captivity in which she is raised and the fearsome wild to which she is returned captures the abilities of both humans and animals to cross the seemingly unbridgeable gap between their radically different worlds. Especially now, at a time when the sanctity of the wild and its inhabitants is increasingly threatened by human development and natural disaster, Adamson's remarkable tale is an idyll, and a model, to return to again and again.

Illustrated with the same beautiful, evocative photographs that first enchanted the world forty years ago and updated with a new introduction by George Page, former host and executive editor of the PBS series Nature and author of Inside the Animal Mind, this anniversary edition introduces to a new generation one of the most heartwarming associations between man and animal.
JOY ADAMSON was born in Austria in 1910 and educated in Vienna. At twenty-six, she went to Kenya to visit friends and remained there until her death in 1980. A well-known painter and photographer, she was commissioned by the government of Kenya to paint portraits of African tribesmen and to photograph the indigenous flora of East Africa, for which she received the Grenfell Gold Medal of the Royal Horticultural Society. In addition to founding the Elsa Wild Animal Appeal, devoted to the preservation of wildlife, she was the author of two other books, Living Free and Forever Free. She was married to George Adamson, the Senior Game Warden of the Northern Frontier Province in Kenya.
“Moving and incredible, [with] some of the most extraordinary photographs ever seen.”
—The New York Times

“Elsa and the Adamsons are ideal figures in a peaceable kingdom.”
—The New Yorker

“Reads like a letter from Eden to homseick humanity.”
—New York Herald Tribune