The Ferrari in the Bedroom (Paperback) 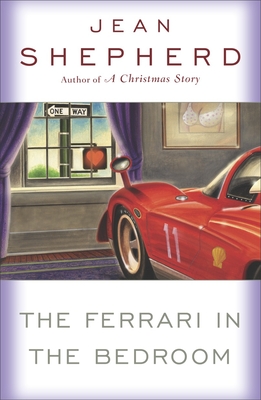 The Ferrari in the Bedroom (Paperback)

Jean Shepherd was one of America’s favorite humorists, his most notable achievement being the creation of the indefatigable Ralphie Parker and his quest for a BB gun in the holiday classic A Christmas Story. But he was so much more, a comic Garrison Keillor–like figure whose unique voice transcended the airwaves and affected a whole generation of nostalgic Americans.

The Ferrari in the Bedroom is Shepherd’s wry, affectionate look at the hang-ups and delusions of Americans in the 1970s. From his sardonic assessment of fads such as the nostalgia craze (“Thinking that the old days were good is a terrible sickness. Everything was just as bad then as it is now.”) to a modest proposal for the foundation of S.P.L.A.T. (The Society for the Prevention of the Leaving of Animal Turds), Jean Shepherd provides a generous measure of his special brand of wise and warm humor as an antidote for some of America’s more ridiculous obsessions.
For many years a cult radio and cabaret personality in New York City, Jean Shepherd was the creator of the popular film A Christmas Story, which is based on his novels In God We Trust, All Others Pay Cash and Wanda Hickey’s Night of Golden Memories, and which has become a holiday tradition on the Turner Network. Jean Shepherd passed away in 1999.
“True genius.”—Library Journal

“[Shepherd’s] descriptions of the mores of today as seen through the perspective of a robust male provide many a chuckle . . . and the wish that life were simpler and people knew what and who they are.”—Best Sellers

“[Shepherd’s] appeal rests securely on the metaphor that adult life is a continuation of a boys’ pickup sandlot game.”—Commentary