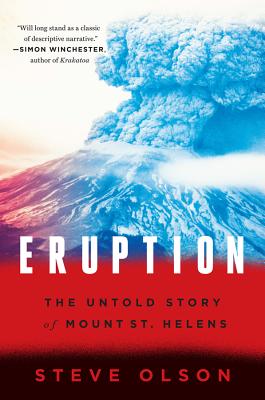 “Eruption is everything a nonfiction book should be: Marvelous storytelling mixed with a great cast of characters, fascinating science, and little-known history. Anyone with even a passing interest in the Pacific Northwest or volcanoes will love this book. I read it in three long, satisfying gulps, and, like all great books, its stories linger in the mind long after you've read the last page.”
— Tom Campbell, The Regulator Bookshop, Durham, NC

A riveting history of the Mount St. Helens eruption that will "long stand as a classic of descriptive narrative" (Simon Winchester).

For months in early 1980, scientists, journalists, and nearby residents listened anxiously to rumblings from Mount St. Helens in southwestern Washington State. Still, no one was prepared when a cataclysmic eruption blew the top off of the mountain, laying waste to hundreds of square miles of land and killing fifty-seven people. Steve Olson interweaves vivid personal stories with the history, science, and economic forces that influenced the fates and futures of those around the volcano. Eruption delivers a spellbinding narrative of an event that changed the course of volcanic science, and an epic tale of our fraught relationship with the natural world.

Steve Olson is the author of Eruption: The Untold Story of Mount St. Helens (winner of a Washington State Book Award), Mapping Human History (a finalist for the National Book Award), and other books. He has written for the Atlantic, Science, Smithsonian, and more. He lives in Seattle, Washington.
In Mr. Olson’s telling, [the survivors’] stories read like urgent fiction…These vignettes lend a human face to an event that has become associated largely with geology.
— Michael O'Donnell - Wall Street Journal

As Steve Olson reminds us in his vividly reported new history…what happened on May 18, 1980, in the primordial thickets of the Pacific Northwest, was an enormous, multi-faceted event…This engaging book maneuvers deftly along the way toward impact.
— Mark Damsker - USA Today

In recreating the history of the region and the social, economic and political moment in which the volcano erupted, Olson also reaches for a deeper, existential meaning in describing the many lives lost to the eruption. In the mundane quality of their activities at 8:31, we see ourselves.
— Kim Tingley - New York Times Book Review

Olson intercuts stories of victims including David Johnston, the volcanologist who was monitoring the explosion, with an account of its impact on science?such as popularizing the use of lidar. With 1,500 potentially active volcanoes worldwide, this is an urgent reminder of the need for advances in the field.
— Barbara Kiser - Nature

Vividly retells the story of the May 1980 disaster and questions whether more might have been done to keep the 57 people who died out of harm's way.
— John B. Saul - Seattle Times

In his evocative and convincing new book, author Steve Olson reveals that the eruption—the most powerful natural disaster to ever strike the US—is much more than a horror show…He has a bigger picture in mind, one of the eruption’s role as a touchstone for an evolving society and natural world.
— Randy Dotinga - Christian Science Monitor

A first-class, meticulously crafted piece of reportage that is as exciting as it is informative—and will long stand as a classic of descriptive narrative of the biggest American volcanic eruption of all our lifetimes—or so we all hope!
— Simon Winchester, author of Krakatoa: The Day the World Exploded

Olson and his truly groundbreaking Eruption join a rarefied pantheon, where readers can come to understand the most dramatic geological event of our time. This book, as welcome as it is amazing in the depth of its background and the strength of its storytelling, will stand as a stirring and stilling accomplishment.

— Robert Michael Pyle, author of Wintergreen: Rambles in a Ravaged Land and Where Bigfoot Walks: Crossing the Dark Divide

Steve Olson has brought new dimensions to my experience of the mountain. [He] masterfully delineates the personal histories, cultural assumptions, values, visions, and preconceptions that were brought to bear on the mountain that day. He has the gift of clarity and an enviable ability to find and make drama, present the human narrative, and engage his readers on multiple levels.
— David Guterson, author of Snow Falling on Cedars

In Eruption, science writer Steve Olson goes well beyond recounting Mount St. Helens’ geologic awakening, deadly explosion and aftermath. This fascinating book also chronicles the economic and cultural tensions gripping this part of the nation in the run-up to the May 18, 1980, catastrophe.

A gripping moment-by-moment account of what happened on the day the volcano blew.
— Michael Upchurch - Oregonian